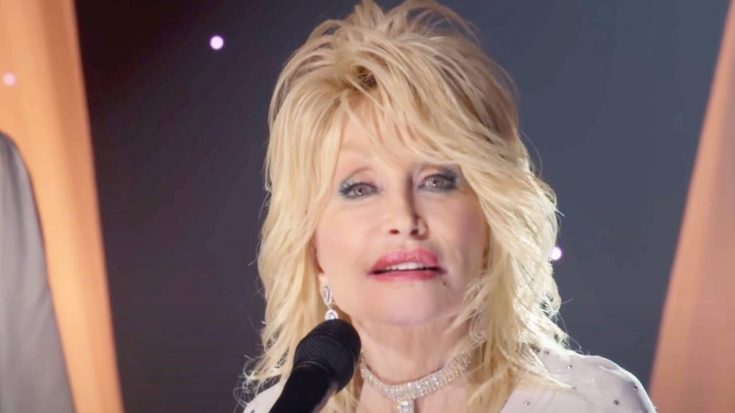 On February 2, The Rock and Roll Hall of Fame announced their 2022 nominees, and it included several first-time nominees, as well as a hip-hop heavyweight who scored a nomination in his first year of eligibility.

Beck, Eminem, Duran Duran, Lionel Richie, A Tribe Called Quest, Carly Simon and Dolly Parton are all first-time nominees, while this is MC5’s sixth nom and Rage Against the Machine’s fourth. Kate Bush, Judas Priest, New York Dolls and Devo are all up for their third nomination. This is also the second nomination for Dionne Warwick, Eurythmics Z, Pat Benatar, and the late Fela Kuti.

From the reaction online, it was pretty clear that fans thought Dolly Parton should be in the Hall of Fame. Even Rolling Stone thought so!

On March 14, Dolly Parton released a statement on social media revealing that she is removing herself from Rock and Roll Hall of Fame voting.

“Even though I’m extremely flattered and grateful to be nominated for the Rock & Roll Hall of Fame, I don’t feel that I have earned that right,” she wrote. “I really do not want votes to be split because of me, so I must respectfully bow out.”

She added that she hopes the Hall of Fame understands and one day, will nominate her again, “if I’m ever worthy,” she writes.

The country legend also said that her nomination has inspired her to write a full-on rock ‘n’ roll album one day! Her husband Carl Dean, who she calls a “rock ‘n’ roll freak,” apparently has always encouraged her to do one.

Three days later, the Rock and Roll Hall of Fame responded, and it was not what we expected. In short, they said that her nomination will not be removed from ballots.

“All of us in the music community have seen Dolly Parton’s thoughtful note expressing her feeling that she has not earned the right to be inducted into the Rock & Roll Hall of Fame. In addition to her incredible talent as an artist, her humility is another reason Dolly is a beloved icon by millions of fans around the world,” the statement read.

“From its inception, Rock & Roll has had deep roots in Rhythm & Blues and Country music. It is not defined by any one genre, rather a sound that moves youth culture. Dolly Parton’s music impacted a generation of young fans and influenced countless artists that followed. Her nomination to be considered for induction into to the Rock & Roll Hall of Fame followed the same process as all other artists who have been considered.”

This back and forth turned into somewhat of a “controversy,” but eventually, Dolly said that she would accept the induction “gracefully.”

In an April interview with NPR‘s Morning Edition, Parton explained why she initially rejected the nomination:

“But when I said that, it was always my belief that the Rock & Roll Hall of Fame was for the people in rock music, and I have found out lately that it’s not necessarily that. But if they can’t go there to be recognized, where do they go? So I just felt like I would be taking away from someone that maybe deserved it, certainly more than me, because I never considered myself a rock artist. But obviously, there’s more to it than that.“

On Thursday (May 4), the Rock and Roll Hall of Fame announced that this year’s class of inductees included Dolly!

A post shared by Rock & Roll Hall of Fame (@rockhall)

Now, in a new interview with Billboard, Dolly is addressing the “controversy.”

She said that her manager Danny Nozell called her yesterday morning to tell her she was going to be inducted. Her response?

The singer joked to him, “Well, I guess I’m a rock star now!”

Dolly also added, “I feel honored that all the people that voted for me did. And I appreciate the Rock & Roll Hall of Fame people for staying there with me. I never meant to cause trouble or stir up any controversy. It was just always my belief — and I think millions of other people out there too — always thought the Rock & Roll Hall of Fame was just set up for the greatest people in the rock ‘n’ roll business, and I just didn’t feel like I really measured up to that and I don’t want to take anything away from the people that have worked so hard.”

She later found out that being inducted into the Rock and Roll Hall of Fame is so much more than being a rock and roll singer.