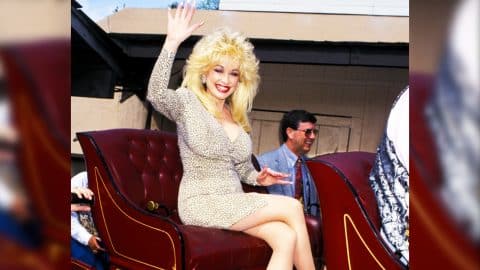 We all knew the Queen of Country was well off…but it appears she’s got more cash than anyone ever imagined!

Dolly Parton has been building her empire from humble beginnings, living in dirt-poor conditions with her entire family. Ever since she was a child, Parton was determined to make it big. Now, 74 years later – she’s made it very big.

If you'd told me back then the girl on the left would turn into the person on the right, I would've though you were crazy! But I'm so grateful for it all. Where I came from, and where I've been. 😊 pic.twitter.com/oEHnhkEvN9

With a seemingly-endless number of hit songs under her belt, roaring duets, ballads, pop crossovers, and many more – you might think that would be enough for Parton, but she didn’t stop there!

Beyond her soaring music career, Parton also starred in hit movies and television specials like 9 to 5, Steel Magnolias, Rhinestone, The Best Little Whorehouse In Texas, and others. Recently, she’s even inked a deal with Netflix for a series of movies based on her songs. Oh, and there’s also that 9 to 5 sequel in the works too…

Her career flourished as an entertainment icon and beloved American treasure. With hits like “Jolene,” “Islands In The Stream,” “I Will Always Love You,” and “9 to 5,” she had already earned her spot as a fore-running female legend.

She was hungry for success though, and in the late 1980s, Parton purchased a theme park in Sevier County, Tennessee that was once called Silver Dollar City. She renamed it Dollywood and it quickly became one of the South’s most prized tourist attractions.

Over the years, Dollywood has become the largest employer in the state and combined with its sister waterpark and lodging resort, it has earned a spot as one of the top-most tourist destinations in the country.

Dolly Parton’s massive theme park and business ventures contribute heavily to her net worth, and her catalog of unforgettable songs and achievements also keep the cash rolling in – but it’s her commitment to keep touring that gives her a major cash boost!

She’s been out on major tours twice in the last decade, traveling across the world performing at tons of venues and selling millions of tickets, merchandise, and records.

So is there any doubt as to how Dolly Parton is worth more than half a billion dollars? Yup,  you heard that right, folks. She’s worth more than Reba McEntire, Kenny Rogers, Carrie Underwood, and Tim McGraw – COMBINED.

Her $500 million *estimated* net worth even eclipses that of superstar Taylor Swift ($220 million)- and has a hefty lead on good ol’ Garth Brooks ($150 million). But, the reality is – with all of her business ventures growing and changing all the time, her net worth is too. So the real number could be larger or smaller depending on where her investments sit.

With all this money at her disposal, Dolly Parton has proved time and time again that she’s committed to giving back to her community and even blessed each family affected by the Gatlinburg fires with an unexpected gift during their time of need.