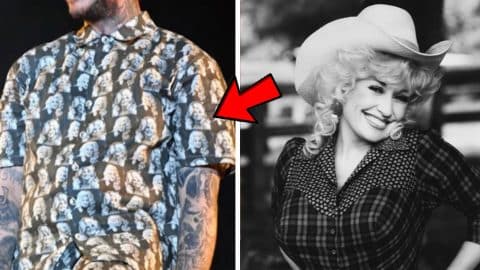 What a tribute to Dolly Parton at the Bonnaroo Festival 2019!

Every year thousands of fans make their way to experience a 4-day music festival with 150+ artists from all genres, more than 10 stages,  camping, and memories to last a lifetime on a 650+ acre farm in Manchester, Tennessee. On Saturday, June 15th one of the headliners paid a unique, yet amazing, tribute to “The Queen” of country music.

Love the outfit from head to toe @PostMalone 😉 pic.twitter.com/Qxxhpi96NO

On Saturday night Post Malone headlined this year’s 2019 Bonnaroo Festival rocking an outfit inspired by Dolly Parton from head to toe. The famous rapper took the stage with a pair of custom black and white pants with a matching shirt, literally covered with nothing but Dolly Parton images. Honestly it couldn’t have been a better fashion choice being that the festival is held 3 hours from Nashville, Tennessee and Dolly Parton couldn’t agree more.

Sunday afternoon the legendary country singer responded with a clever tweet approving of Post Malone’s outfit he had chosen for his hour and half set at Bonnaroo.

Post Malone has always had a love for country music.

Why I Love Country Music with Rapper Post Malone

In an interview from The Vice Post Malone shares his love for country music. He says his mom would always play country music and Johnny Cash is one of his greatest influences. He even has a tattoo of Johnny Cash on his shoulder!

Later down the line Post Malone may make a country album.

Post Malone has already expressed his interest in being a country musician. He strongly believes that there shouldn’t be boundaries on artists expressing themselves through music. Below he shows us a hint of his country side with a Bob Dylan cover of “Don’t Think Twice, It’s Alright.” Post Malone is already scheduled to headline a country music festival this year in Wyoming. He will take the stage July 25th at this year’s 2019 Cheyenne Frontier Days festival with Tim McGraw, Miranda Lambert, and Keith Urban.

Dolly Parton will never go out of style and we hope he brings this outfit to the Cheyenne festival.