Dolphins Play With Pufferfish To Get High Off Their Poison 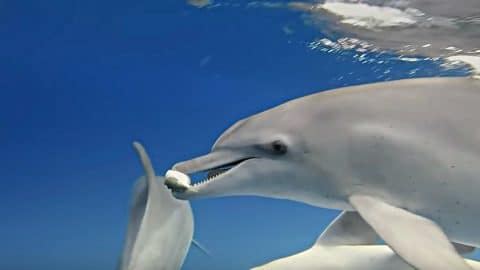 We’ve all had crazy nights out with friends – and maybe dolphins are a little more like us than we think.

Dolphins gets high off Pufferfish toxins & through them like a ball https://t.co/kJ4Ynh7btu pic.twitter.com/Dh0s2hH1jw

Just like people at happy hour after a long week at work, dolphins love to kick back with a nice dose of pufferfish poison. You read that correctly – the skin of a pufferfish contains a chemical that creates a reaction in dolphins that’s similar to being high. The neurotoxin present on the pufferfish skin creates a sense of lightness and well-being. It’s similar to a beer buzz or what a person would feel after ingesting THC. Just like high doses of alcohol in humans, too much pufferfish toxin can prove fatal to dolphins, but that doesn’t stop them from having their fun.

Dolphins use Pufferfish to get high. Pufferfish produce a potent defensive chemical, which they eject when threatened. In small enough doses, the toxin seems to induce "a trance-like state" in dolphins
(https://t.co/Dz9yKyKYt6) pic.twitter.com/8Kni2l7THS

Dolphins chew on the pufferfish to extract the toxins. Much like a group of guys passing around a bottle of liquor, the dolphins form a circle and pass the pufferfish from one to another, sharing the good feelings with their friends.

Scientists aren’t sure how dolphins caught onto the pufferfish poison phenomenon, and it’s not yet normal behavior for a pod of dolphins. Don’t be too worried about the pufferfish that had to act as a plaything; they tend to simply continue on their way, slightly jostled but otherwise unharmed.