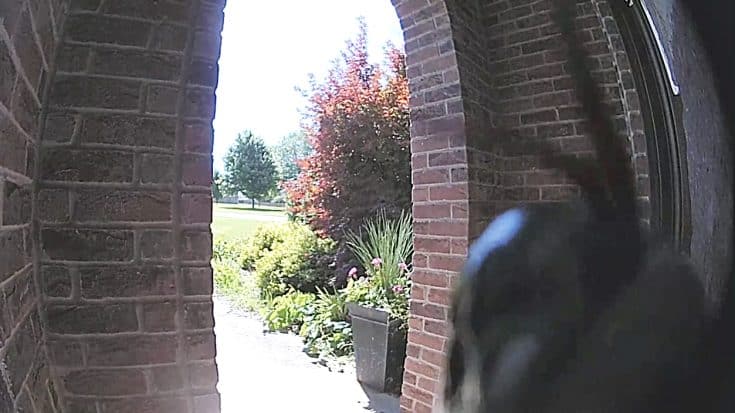 It was a beautiful day in the neighborhood when this doorbell camera activated in a quiet suburban area of Arkansas. The homeowner got the notification of the visitor while he was at work and was shocked at what he saw.

“I was sitting in an executive meeting when the alert that someone was at my door went off. I looked at the camera and was stunned. Showed my coworkers and completely derailed the meeting.”

The visitor wasn’t a human, it was a massive snake slithering up the front door. Apparently, it heard a nest of baby birds chirping up there and was on a mission to get a bite to eat.

You can hear the birds chirping as the snake climbs up the wall. The snake looks huge! And It doesn’t appear to be playing around because you only get to see it flickering its tongue for a few seconds before it slithers up towards the nest.

For four and a half minutes you watch the snake’s body slide past the camera. In the background, you can see the momma and daddy bird flying back and forth trying to figure out what they’re going to do about this cold killer.

Meanwhile, the homeowner is still stuck in a meeting trying to figure out what he’s going to do too because he’s got kids who can easily get bitten if they open the door.

“We’ve had tiny six-inch snake before, but, never ON the doorbell. I have kids and was going to remove the snake from my property but it was gone.”

Lucky when he got home to remove the snake it was gone and the kids were safe. It’s super creepy footage and we can imagine the man’s terror being stuck at work and not able to protect his kids. We’re happy it all turned out fine for him and his family.

Take a look at the video yourself below.