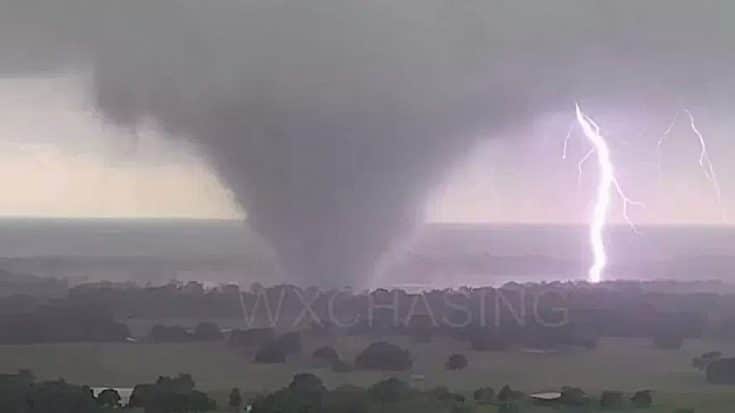 Texas has been getting hit with some serious tornados lately and one stunning video has been captured by a drone showing a tornado that tore through Canton, Texas.

The incredible footage was captured by Brandon Clement, who works for WXChasing, a storm chasing team that posted the video to Facebook yesterday (May 29th, 2019). The video shows highly detailed moments when the tornado was shredding a path through rural farmland in Canton.

“This may be some of the best tornado video ever shot. Make sure you watch in the highest resolution on a decent screen. The motion and the debris exploding is quite remarkable.” WXChasing said in their FB post.

The epic, yet frightening scenes of the aftermath make you realize how powerful these tornados really are. After the tornado tore through the farmlands the team put the drone back into the sky to film the damage done to the surrounding houses, barns, and buildings.

The picture above was taken by the drone and shows a house that had its roof ripped off by the strong winds of the passing tornado. Many other houses in the area were not as lucky as this house and were completely leveled to the ground as you’ll see in the video below.

Last year when tornados hit Canton, Texas it left 54 people injured and 5 killed. Fortunately, no serious injuries or deaths have been reported with this tornado.