By Manly Bryant on November 20, 2020
Advertisement 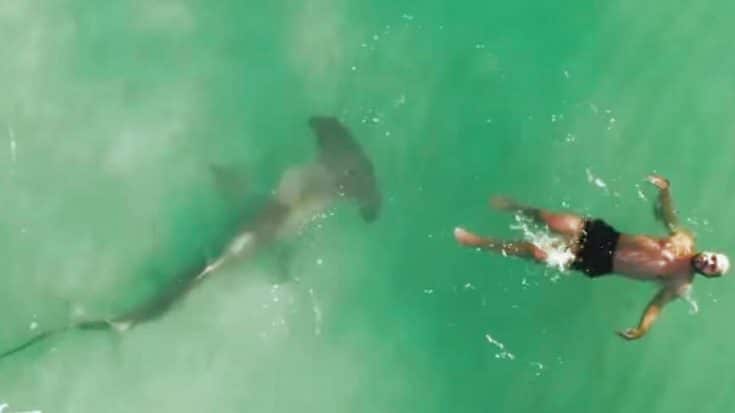 Jason McIntosh, a drone operator from Miami Beach, Florida was flying his drone around South Beach and captured some incredible footage of a hammerhead shark swimming close to a man floating in the water.

According to WSVN, “the chilling encounter occurred about 25 feet off shore on the beach between Fourth and Fifth Streets.”

Jason has filmed many sharks before at the beach but nothing was like what he caught on film this day. The footage starts off with the drone focused on the shark as it slowly swam through the water towards the man who soon appears on the camera.

The swimmer floated there oblivious to the potential danger that lurked beneath him and even gave the drone a thumbs-up as he noticed it flying above him. The hammerhead, which was way bigger than the swimmer, circled the man as if he was investigating him.

After making a circle around the swimmer, the shark did something very eerie. It started swimming straight towards the man and got so close that for a moment it appeared the shark was going to bite his foot.

Fortunately, however, after inspecting the swimmer the hammerhead became uninterested in him. It eventually swam off and nobody was hurt. What makes this intense video entertaining though is Jason decided to add the soundtrack of the 1990’s MC Hammer song “U Can’t Touch This.”

Watch The Hammerhead Shark Footage Below