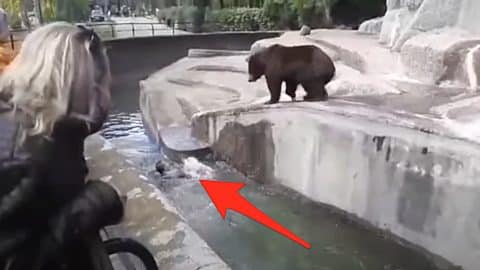 If you thought the coronavirus pandemic craziness was over, wait until you hear what a drunk polish man did just days after the Warsaw Zoo opened up after lockdown in Poland.

Apparently the 23-year-old drunk unnamed man was heavily intoxicated before he decided to jump into Sabrina’s enclosure. Sabrina is an elderly female bear that used to work in the circus before she moved to the zoo and she was clearly confused at his presence.

The man hopped the fence and taunted the bear until she ran over to him in a full sprint. He then jumped into Sabrina’s water pit before she was able to reach him and he began swimming around.

Curious, the bear stared at the man as he splashed around and eventually jumped into the water after him. The man grabbed the elderly bear by the ears in an attempt to control the bear so she wouldn’t bite him.

At one point it looked like the man was going to drown the bear, but he soon let go and scrambled out of the water and climbed to the top of the bear’s rock formation. Firefighters and police soon arrived to retrieve the man and arrested him.

A spokesman for the Warsaw Zoo, Ann Karczewska, said “Sabrina, an old bear who was attacked by an adult man, physically came out of this event unscathed, but she is very stressed,” according to Insider.

He was charged $300 for animal cruelty and disturbing the peace and $7000 for not wearing a face mask. The man was ultimately sentenced to serving 20 hours of community service per month and forced to give up alcohol.

Check Out The Video Below Of The Drunk Man & Bear