By Miranda Raye on November 29, 2021
Advertisement 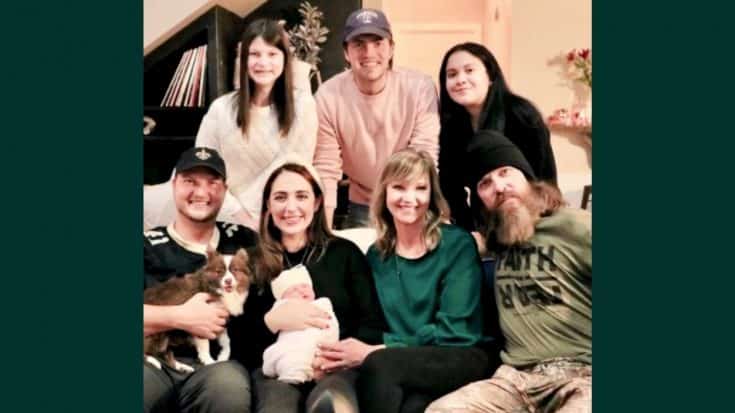 There’s a new duckling in the Robertson family!

“Baby girl Robertson coming in November! The pups can’t believe they’re getting a sister and we can’t wait to meet our little girl!” Brighton wrote when announcing her pregnancy on Instagram.

Brighton announced that her and Reed’s daughter was born on November 24, which was the day before Thanksgiving. The couple named their baby girl Merris Carroway Robertson.

Merris’ name was likely inspired by the name of Reed’s paternal great-grandmother, Merritt (she was Phil and Si Robertson‘s mother). Uncle Si’s middle name is Merritt, and one of Reed’s cousins is also named Merritt.

As for Merris’ middle name, “Carroway,” that comes from Reed’s paternal grandmother, Miss Kay. Her maiden name was Carroway. Reed’s cousin, Sadie, has Carroway as a middle name too.

Brighton shared a series of photos on Instagram to introduce Merris to the world. “Reed and I are so in love with her and can’t believe she’s ours!” she captioned the pictures.

Reed’s parents, Jase and Missy, also shared some photos of Merris on their respective Instagrams. Merris is their first grandchild.

“This Thanksgiving brought a whole new meaning to gratitude for our family,” Missy said. “Life is always a gift. Sometimes, it comes so close to perfection that it literally takes your breath away…Merris Carroway Robertson, you have no idea how much love surrounds you…“

Look below to see the photos Jase and Missy shared of baby Merris. She’s precious!