By Jennifer Pernicano on July 24, 2018
Advertisement 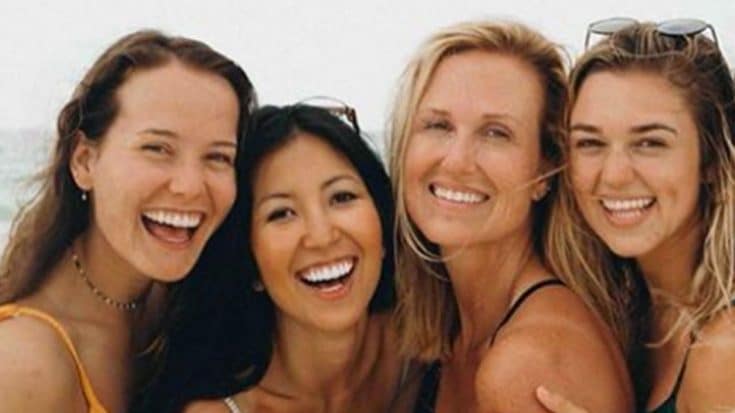 Another duckling is on the way!

The Robertson family, of Duck Dynasty fame, gave us front row seats into their lives throughout eleven seasons of the hit show, which ran from 2012-2017. We watched Willie, his brothers Jase and Jep, his dad Phil, and his Uncle Si, as well as everyone’s children, navigate life in their hometown of West Monroe, Louisiana while running Duck Commander, the family’s duck call company.

Willie, the CEO of the company, was joined by his wife Korie, and their children Rebecca, John Luke, Sadie, Little Will, and Bella. They adopted a 12-year-old son, Rowdy, during the final season of the show. Rebecca, 29, is not legally their daughter, but she came to live with them as a foreign exchange student from Taiwan when she was 16 years old, and has been part of the family ever since. Willie and Korie consider her a child of theirs, and their other children consider her a sister.

The entire family flew to Mexico in early December 2016 for Rebecca’s wedding to John Reed Loflin. Willie walked her down the aisle, while Sadie, Bella, and John Luke’s wife Mary Kate served as bridesmaids.

Happy birthday to the coolest Dad ever, I think probably America would agree ??❤️ Thank you for our amazing family & making our fairytale come true

Now, as Rebecca and John Reed approach their second wedding anniversary, they have exciting news to share…they are expecting their first child!

In a cute announcement on Instagram with their dog Leauxla in tow, the two wore matching jean jackets and held up a children’s jean jacket that read, “My 1st denim jacket.” Leauxla also had a sign that said, “I thought I was ur [sic] baby.”

Rebecca also included a video of her telling her husband the exciting news. She gave him a bag with the very small denim jacket, and he didn’t think anything of it because he thought it was for their dog! He really freaked out when he saw the pregnancy test, though!

We are having a human baby ????❤️ Baby bae coming Jan 2019 { swipe left to see my husband’s reaction when I told him on his birthday & link in bio to read the full story @usweekly ?? }

“He was shocked and like, ‘Wait, what!?’” Rebecca told Us Weekly. “He was just crying then, of course, I was laughing the whole time.”

On her Instagram Story, Rebecca shared the video of telling her mom, Korie, who couldn’t believe it herself! Even when looking at the pregnancy test, you can hear her asking, “WHAT?!”

Rebecca also told Us Weekly that she is about 15 weeks pregnant and is due January 15! Congratulations to Rebecca and John Reed on their exciting news!

Korie also shared the video of her reaction on social media. You can watch it in the video below.

I’ve been dying to tell y’all this!! @rebeccalorobertson @johnreedloflin are having a baby??????Which means Willie and I are going to be grandparents ?❤️?The kids said my voice just got higher and higher when they told us the news “You feel fine; you feel normal?!?” ?Sooo excited!!! She’s due in January, can’t wait!!! What will they call us?? Suggestions? Swipe to see their adorable birth announcement pic and click the link in bio for more of the story @usweekly