Dust Clouds From The Sahara Desert Headed For U.S. 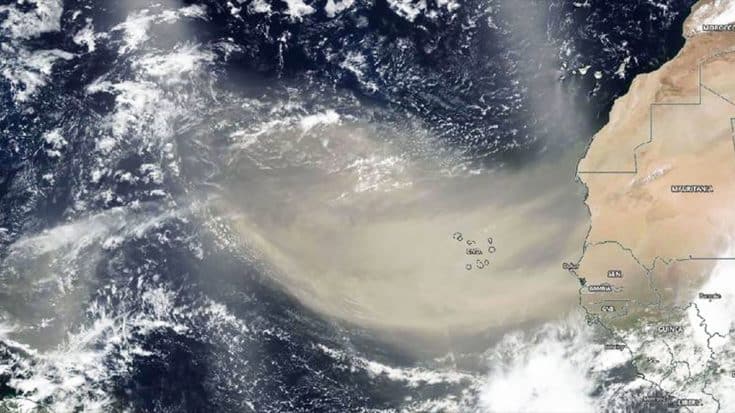 A massive plume of dust from the Sahara Desert in Africa has now pushed from the Caribbean Sea into the Gulf of Mexico and is expected the U.S. Gulf Coast by Friday, June 26,2020.

Known as the Saharan Air Layer, this mass of very dry, dusty air commonly forms from late spring through early fall and moves into the tropical Atlantic Ocean every three to five days, according to the National Oceanic and Atmospheric Administration.

Visible from space, this annual occurrence usually occupies a 2 to 2.5-mile-thick layer of the atmosphere with the base starting about 1 mile above the surface. The activity usually ramps up in mid-June, peaks from late June to mid-August, and begins to rapidly subside after mid-August. During peak period, the dust can be pushed as far west as Florida, Central America, Texas, and cover vast areas of the Atlantic. It is estimated between 2-9 trillion pounds of dust is blown across the Atlantic Ocean during this period.

Many people will notice their allergies spike during this time due to poor air quality. The weather will also be drier as the dust absorbs moisture out of the air.

A thin layer of #Saharandust is in the surface of our cars, exterior tables, fans, etc. This extraordinary dense SAL was lifted from the Saharan desert and traveled to the Caribbean. The red color comes from the iron minerals that travel in this layer. pic.twitter.com/DRLP13kXRp

The dust helps build beaches in the Caribbean, fertilizes soils in the Amazon, and the iron particles feed phytoplankton in the Caribbean. The warmth, dryness, and strong winds associated with the Saharan Air Layer have also been shown to suppress tropical cyclone formation and intensification.

For more information watch the video below.