“DWTS” Pro Says He Was Arrested In Ukraine Amid Russian Invasion

By Jennifer Pernicano on February 28, 2022
Advertisement 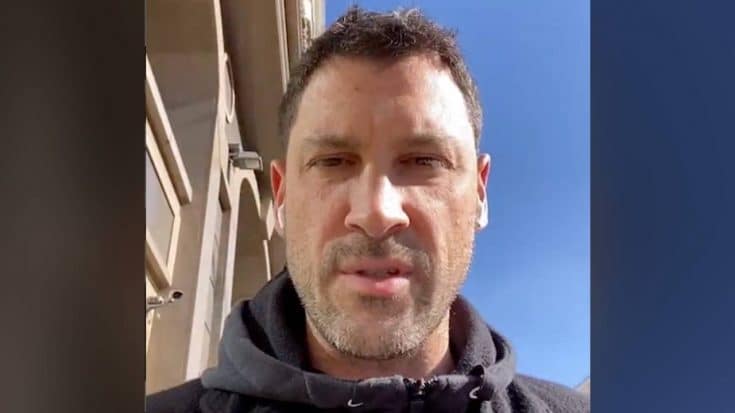 Maksim Chmerkovskiy rose to fame as one of the professional dancers on the popular competition series, Dancing with the Stars. He won the show once during the 17 seasons he competed, and was the runner-up twice. The dancer, who also goes by Maks, married fellow DWTS pro Peta Murgatroyd in 2017 and they share a five-year-old son named Shai.

The pro dancer was born un Ukraine along with his brother, fellow DWTS pro Valentin Chmerkovskiy. Their family moved to New York City in 1994, fleeing the country to avoid violence like the country is experiencing today. Maks has been in Kyiv, Ukraine, shooting the dance competition series World Of Dance and has been posting videos of his experiences during the Russian invasion.

Standing on the balcony of his hotel, the pro-dancer said that even though they knew this was coming, he “hoped that the finality of this situation would be averted, that there would not be these kind of aggressive measures.”

Maks followed up with a second video, saying how fortunate he is in comparison to others. He has an American passport and the financial means to leave the Ukraine whenever it is safe and possible to do so.

Makes shared additional video updates from Kyiv the following day (February 25). He captioned his first video with the message, “Please speak and post about all of this, so talking resumes and shooting stops!”

In his video, Maks spoke about how some of the people he was judging on World of Dance mere days ago are now, “getting guns and getting deployed to defend the country.”

He said, “the situation is pretty dire.”

In the video, Maks clarified he is not currently trying to leave the country:

“I’m staying here,” he said. “I’m gonna do my best to make sure that I’m as safe as possible, but I’m not moving towards the border currently. It’s, I heard, not safe…I made a decision not to try to go right now.“

He previously shared Instagram stories from the hotel’s bomb shelter, the underground parking garage. In his daily update on February 28, Maks said he was trying to figure out how to get to the border to flee the country. He also revealed that he was arrested.

“Just a lot of fighting everywhere,” he said in the video. “The streets are crazy. At one point, I got arrested…but all good, promise. That was probably the least traumatizing moment in this whole thing as far as Ukraine is concerned, but for me, it was just a reality check.”

He has been updating fans pretty frequently, so he told everyone not to worry if they don’t hear from him for a while. It likely means he is traveling and trying to get home to his wife and son.

Watch his latest update below.