Eagle Plummets From Sky In Death-Dive To Attack Wild Boar 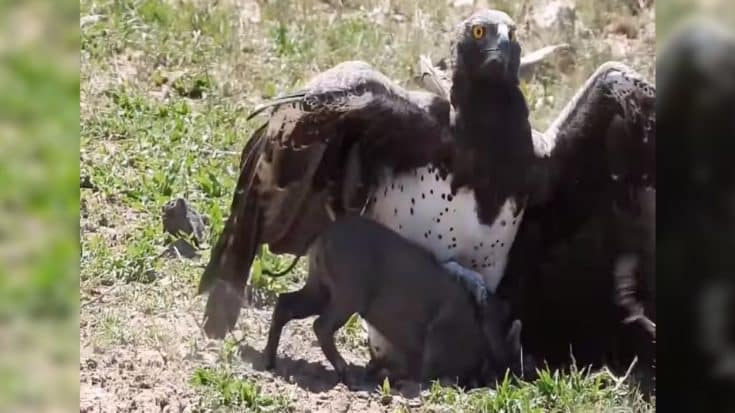 The video was filmed by a person who was riding in a vehicle down an old dirt road. As they journey down the road, a group of baby boars comes running across the road ahead of the vehicles.

Like a lightning strike, an eagle comes flying onto the picture and swoops down on top of the group of boars sinking its talons into one of them. The eagle is so massive compared to the baby boar. It appears to be just a few weeks old.

“Not even worried about the pig, keeping its eyes for other predators that may attack,” a user on Facebook wrote about the eagle in the comments of the video.

It held its prey down with a firm grip and walked around with it repeatedly stabbing it with its talons to kill it. The boar eventually tired out and died. The eagle flew then off to get higher ground to check its surroundings.

After it felt safe, it flew back down to collect its kill. Multiple vehicles were gathered around and were watching the eagle throughout the entire process.

“It’s like the eagle is covering his spoils looking around and saying ‘nothing to see here, move along.’ Yes it is sad about the baby boar but this is how nature works and everybody who says animals in wildlife refuges or zoos should be free well this is what that would look like,” another user wrote.

View Footage Of The Eagle Below