Elk Charges At Yellowstone Tourist After She Ventures Too Close 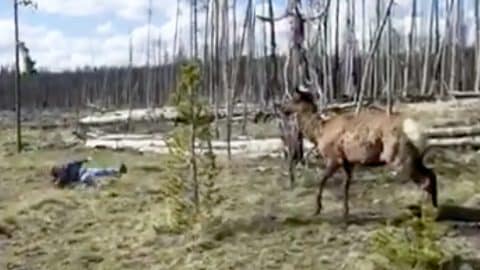 Yellowstone park guides are always cautioning visitors to keep their distance when they encounter wildlife – but this woman failed to take that warning to heart.

Yellowstone wildlife guide Jody Tibbitts recorded a scary video while on the job. An elk was hanging out quietly in the forest, minding their own business, when a park-goer got a little too close for comfort.

The elk let the woman know in no uncertain terms that they were not interested in having their picture taken.

The animal charged her. Thankfully, the woman wasn’t hurt – she fell because she tripped, not because she was knocked over by the elk.

According to National Parks Service spokesman Jeffrey Olson, many national park visitors are putting themselves in danger as they attempt to get the perfect shot to post on social media.

We are ending the whole "does size matter" debate here and now! I would guesstimate this big guy was carrying around an extra 50 pounds of velvet covered antlers and he probably weighed close to 700lbs without them. He was imposing and confident and definitely not to be trifled with. I kept my distance and gave the big fella plenty of respect. Elk are incredibly beautiful animals. It’s hard to comprehend their size and strength until you are up close and personal with them…just not too close! #biggame #sizematters #bigrack #yellowstoneelk #elk #wildlifephotography #naturelover #velvet #antlers #yellowstonenationalpark

“There is just kind of an ignorant danger, and then there is a whole other level of the really self-obsessed selfie shooters – and what they do is try to close the distance between them and the animal,” Olson told ABC News.

Olson recommends using the widest lens possible, and never closing in on the distance between yourself and a wild animal. Animals in national parks generally have a healthy fear of humans, and it’s hard to predict what they’ll do if the feel you’re getting too close.

So here is a little better video of what happened on my trip in Yellowstone park today. It is classic at the end she says "that won't happen again" and I replied I bet it won't.