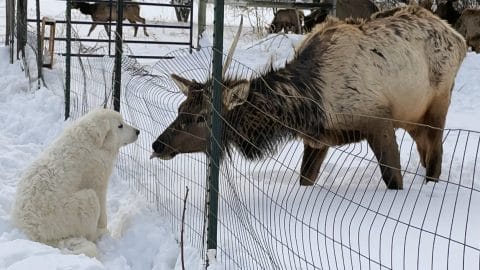 Lauren Sturges from Loveland, Colorado shared an amazing video of her dog interacting with a herd of elk passing by her backyard.

Lauren said earlier in the day that she noticed cars lined up on the road she lives on, U.S. 34, and figured it must have been due to elk crossing the road and blocking traffic. She also said there was a big snow the weekend before and she had been spending all her time caring for two households of animals.

Lauren let Winston, one of her 5-month-old Great Pyrenees puppies, outside in the backyard to go use the restroom and the dog spotted the elk. He curiously ran over to a fence to sit down on the snow and watch them.

Lauren watched to make sure the elk didn’t start getting aggressive and, eventually, she shooed them away once Winston’s brother stepped outside to join him. She called the dogs in the house to keep them safe, however, not before taking a great video of the interaction.

“It was magical. It was kind of a reward after working our butts off all weekend,” she told Reporter Herald. “A giant bald eagle flew down. That was the cherry on top.”

Watch Footage Of The Dog / Elk Interaction Below