Elk Trapped In Swimming Pool Gets Saved By 2 Officers

By Manly Bryant on August 25, 2020
Advertisement 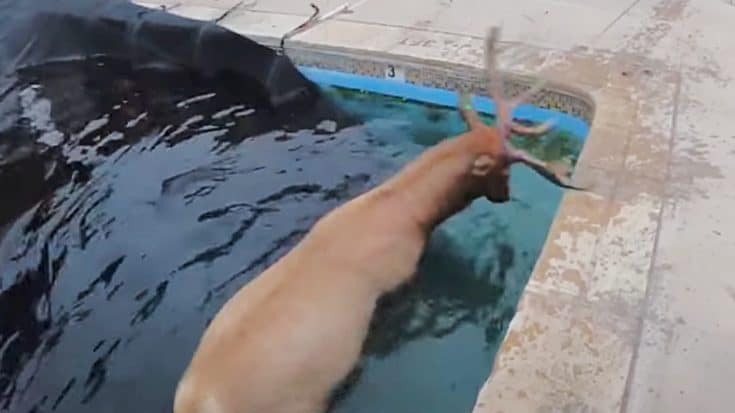 A young bull elk found himself in quite the predicament when he fell in a pool and could not get out on his own.

The event happened in Estes Park, Colorado, which is about 70 miles Northwest of Denver.

The young bull elk attempted to walk across a pool cover when he fell through and ended up standing shoulder-deep in the three feet of water, with no idea how to get himself out.

Colorado Parks and Wildlife posted the video on social media, documenting the rescue in its entirety.

The two officers worked relentlessly, trying to guide the elk to the pool stairs so it could climb out on its own. They loosely draped a rope around the elk’s antlers and tugged the elk towards the stairs. However, the elk didn’t go along with the plan easily. He pulled back against the officers in the opposite direction.

After trying a few different techniques, the elk eventually gave in and the officers cheered as they watched the elk step out of the pool and run out towards the driveway and back to the forest safely.

In the video, they assured everyone that the elk was not hurt during the rescue and that the rope that was seen dangling from the elk’s antlers while running back to the safety of his home, would eventually fall off because it was not tied on to anything.

Watch the video of the young bull elk being rescued below.

On Sunday in Estes Park, Wildlife Officer Rylands responded to a bull elk stuck in a swimming pool. With the help from Estes Park Police Officer Watson, they were able to rescue the elk and send him on his way. https://t.co/ll4mswSrm1 pic.twitter.com/3yhid91Ffa