By Jennifer Pernicano on September 4, 2018
Advertisement 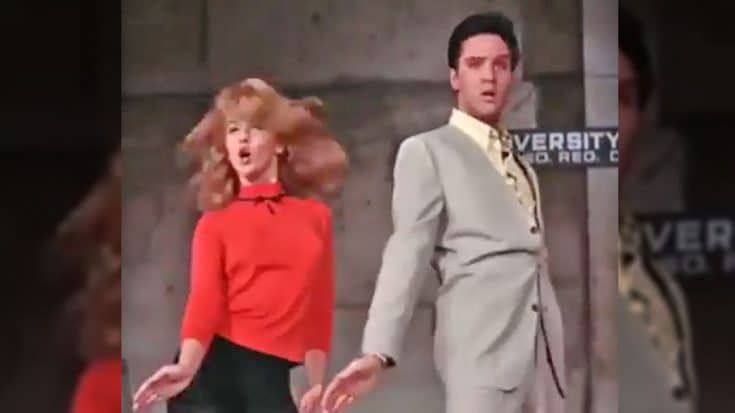 Thanks to professional dancer-turned country singer and actress Julianne Hough, we were reminded of the greatness that was Elvis Presley and Ann-Margret’s recently.

“Happy Monday! Channel your inner Ann-Margret and Elvis Presley and dance through the holiday!” she captioned the clip of the co-stars dancing in a scene from their movie Viva Las Vegas.

The clip that Hough chose to share was from the “Come On Everybody” scene where Elvis’ character Lucky gets on stage with Ann-Margret’s Rusty and performs the song, which includes some sexy choreography that is a little more than the normal hip-shaking we are used to seeing The King do during a performance.

If you haven’t seen this classic Elvis flick, you’ve got to! He plays a race car driver named Lucky Jackson who goes to Las Vegas to race in the city’s first Grand Prix Race, but needs a new engine for his car. He wins enough money to get the engine, but loses it all in the hotel’s pool.

Lucky gets a job as a waiter there to pay for his room and earn back the money he lost, but ends up falling for Rusty, the swim instructor played by Ann-Margret. He also enters the hotel’s talent show to try and win the prize money, and the affection of Rusty, but another race car driver has his eye on her as well.

Check out the clip that we’ve been playing on repeat ever since Hough posted it on Facebook below.

And if you’re like us, and can’t get enough of that, watch the full dancing scene from Viva Las Vegas in the video below.