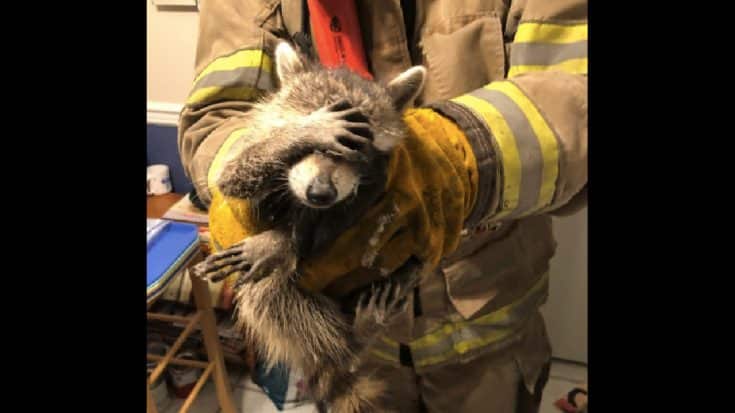 Emergency personnel are used to rescuing humans from not-so-flattering situations, but they don’t often come across raccoons who need rescuing.

An adorable young raccoon from Dalton, Georgia, has found itself with quite a fan club after a post-rescue photo went viral. According to a social media post made by the City of Dalton Fire Department, they were called to a home to help rescue the adventurous coon who had broken in looking for food.

A photo posted by the department shows a firefighter holding the animal who looks plenty embarrassed about his predicament as he is covering his eyes with his paws.

“As you can tell, he was pretty embarrassed about it, but it’s really nothing to be ashamed of. We all need a helping hand every now and then,” the fire department captioned the cute photo. “After helping our new friend out of the jam, we were able to take him to safely release him back into the wild where he’ll hopefully be less adventurous in his search for snacks from now on.”

Raccoons are known for getting themselves in predicaments. Earlier this year a homeowner caught footage of a coon escaping an attic by squeezing itself out through a narrow hole. The critter had apparently become stuck in the attic above the porch and was trying to find its way out. Two glowing eyes are seen looking out of the small hole before the coon pushes his head through, followed by his body. For a moment it appears that the sneaky character may get stuck for good, but some smooth wriggling frees its body as it falls to the porch below.