By Miranda Raye on November 14, 2019
Advertisement 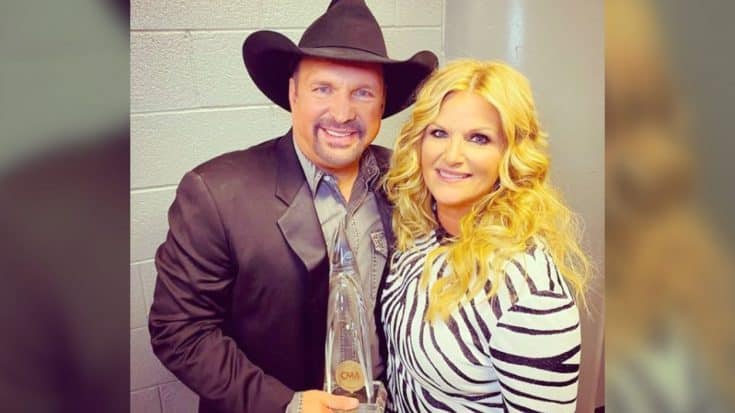 For the seventh time in his career, Garth Brooks left a CMA Awards ceremony with the Entertainer of the Year trophy in hand!

Brooks was one of five artists nominated for the CMA’s EOTY Award this year. The other nominees were Keith Urban, Chris Stapleton, Eric Church, and Carrie Underwood.

@GarthBrooks is your 2019 #CMAawards Entertainer of the Year! CONGRATULATIONS!!!

It came as no surprise when Brooks was named as the winner of the award during the CMA’s annual ceremony on Wednesday night (November 13). He has worked his tail off touring this year, having embarked on not one, but two tours.

In addition to playing on his smaller Dive Bar Tour, Brooks has also been traveling across the country on his multi-year Stadium Tour. Tickets for both tours are in high demand, and quickly sell out when they’re made available.

Since the EOTY Award was handed out at the end of the ceremony, Brooks didn’t have much time to deliver an acceptance speech. But in the short time he had, he made sure to shout-out his wife of nearly 14 years, Trisha Yearwood.

“I love you Trisha Yearwood!” he exclaimed while Yearwood smiled and clapped in the audience.

Yearwood later expressed her love for her EOTY hubby with a post and photo she shared on Instagram. The picture shows Yearwood and Brooks standing backstage while Brooks shows off his new trophy.

“Entertainer of the year and husband of a lifetime! I [love] you and what you have done for country music! Xo,” Yearwood wrote.

Entertainer of the year and husband of a lifetime! I ❤️ you and what you have done for country music! Xo #CMAawards

How sweet is that? Brooks and Yearwood have always celebrated each other’s accomplishments, and this latest one of Brooks’ is definitely worth celebrating!

Tune in to the report below to watch Brooks’ acceptance speech after he won EOTY from the CMA this year. The video includes his shout-out to Yearwood, and you don’t want to miss it!