By Manly Bryant on September 30, 2021
Advertisement 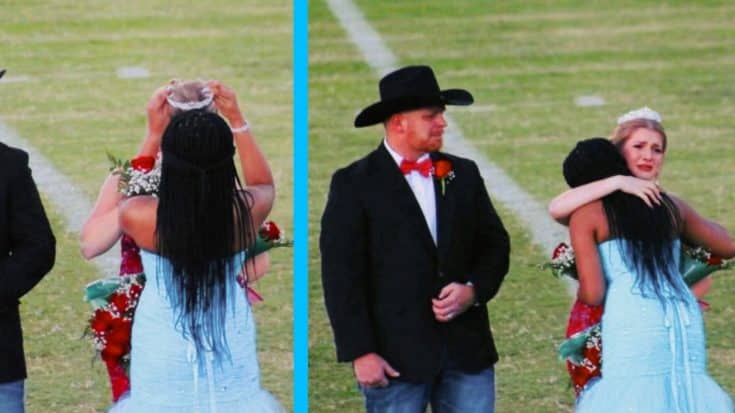 Nyla Covington acted with pure class on Friday night in Forrest Country, Mississippi while families were gathered on the football field for the homecoming event of the year.

After receiving the crown, Nyla proceeded to walk towards Brittany Walters whose mother had died that morning and was standing beside her father on the field. Nyla took the crown off her own head and placed it on Brittany’s head.

“Nyla Covington smiled and cried and cried some more as she walked toward Brittany. Brittany’s father Sean looked confused. Nyla’s father Derwin looked confused, too. Nyla faced Brittany, looked her in the eyes and said, ‘This belongs to you.’ Nyla placed the tiara on Brittany’s head and hugged her tight. A bright light was cast in the midst of gloom. A sliver of happiness surrounded Brittany on her darkest day,” Rick Karle WVTM 13 wrote on Facebook.

Britany’s mother, A.J. Walters, was an employee at FCAHS and died that morning because of cancer. The incredible moment between Nyla and Brittany has since gone viral.

Kristi Easterling shared pictures of the moment on Facebook. In her post, she said, “There was not a dry eye in the stadium. What we have witnessed is pure class.”

She described A.J. Walters as “always kind and smiling.” She also said that “the act that Nyla performed Friday night would have made [her] so proud.”

It took a while for the fans in attendance to catch their breath and calm down over the emotionally intense moment. Tears flowed from everyone’s eyes who were watching and no one seemed to mind.

Even though it was one of the worst days of Brittany’s life and it will take some time for her to heal from the pain, and she may never heal…but she will certainly always remember the kind gesture from her senior classmate Nyla and that may bring a bit of joy to her heart.

Watch Footage Of The Kind Gesture Below