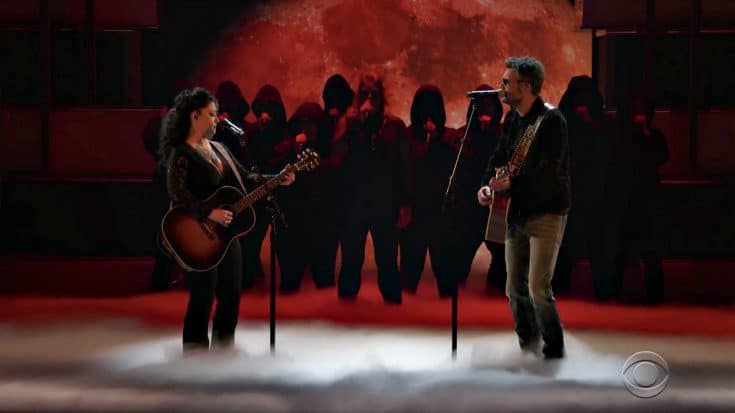 Few songs have raised eyebrows like “The Snake,” a song written by Eric Church for his latest album, Desperate Man. Church enlisted the help of 2019 crowned ACM New Female Artist of the Year winner Ashley McBryde to perform the song during 2019’s ACM awards show. The performance left fans mystified. “The Snake” features intense lyrics and bold language that captivated listeners who were anticipating a politics-free show.

When Church wrote “The Snake,” it was his way of addressing the divisive state of our country and political system. Likening our two-party system to poisonous snakes, Church draws comparisons between a copperhead and rattlesnake, both of which are equally harmful.

As if anticipating that the song would raise questions, Church released a brief video explanation prior to his 2019 ACM Awards show performance. In the video, the singer explains, “‘The Snake’ is really about this political discourse battle armageddon that I think everyone gets involved in.” He added, “By nature, I’m not a very political person. I find it somewhat silly because I kind of get what’s going on.”

He goes on to explain that he feels like each side is only worried about staying in office, and the only way they can do that is to attack the other side. He feels there are very few people in office who really want to accomplish something.  Listen to Eric Church’s full explanation below:

Ever wondered what "The Snake" was about? Hear what it means to Eric in this special 'Story Behind the Song' and make sure to tune in to the @ACMawards tonight to see a special live performance with @AshleyMcBryde! pic.twitter.com/q6QQCqelZM

When Eric Church took the stage with Ashley McBryde for the 2019 ACM Awards, the two took turns on the spoken word song as McBryde stood in front of a screen projecting a slithering copperhead. Church stood in front of a screen displaying an angry rattlesnake. A mysterious hooded choir backed them up. The dark, edgy performance elicited an array of responses from viewers. But, the response was overwhelmingly in Church and McBryde’s favor.

Leave it to Eric Church to perform "The Snake" on national TV. Its not even his best song on his new album or best performance on the night but he's the only artist with the balls to do a song that calls out all the crooked politicians on this stage. Its what makes him the best.

Hear Ashley McBryde and Eric Church perform “The Snake” in the video below.