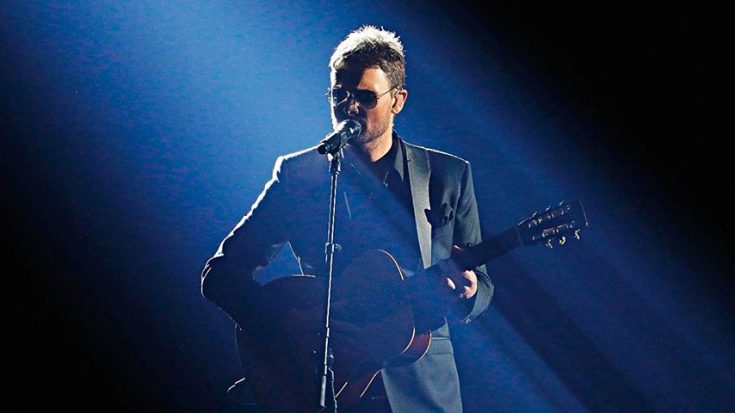 Most of what fans know about Eric Church comes from what they see on the stage, the great smile, riveting voice and positive attitude that just doesn’t stop.

What they didn’t know was behind that great smile was also a man fighting for his life. The country megastar recently shared he had undergone life saving surgery in 2017.

Church told Rolling Stone Country that he was at the end of his world tour in 2017 when he first notice some tingling in his hands, but “I just associated it with nerves,” he says. “I didn’t think it was anything.”

Later that year, in June, Church was deep into the College World Series and texting back and forth with friends when he became aware his left hand “was not responding like it should.” His arm was swollen and upon further examination, he realized beneath his shirt, his arm “was noticeably red and enlarged.”

Because he had flown so much in the past few months, Church thought the symptoms may be from thrombosis, an ailment he’d heard of, but didn’t know much about.

Five Out Of Five Symptoms

After looking it up, “I had five out of five symptoms,” he recalled.

The country star drove himself to the emergency room at a nearby hospital, but they didn’t have the equipment to do the needed ultrasound.

When he finally arrived at the next hospital, it was nearly 5 a.m. Church’s thoughts went to the dark side of the situation.

As the night wore on and morning set in, Church began worrying about his family and kids, all the “what-ifs.” His thoughts turned to just wanting to get back home. Concern quickly turned to worry.

The diagnosis rendered by the doctors at the hospital was terrifying. It was discovered the tingling and swelling in Church’s arm was caused by a blood clot in his chest. Church asked how bad it was.

When Church asked the doctors about the danger of the condition and whether it could actually kill him, their response stunned him. “Today,” was the verdict.

“I Was Going To Die”

Church said the doctors fully expected him to die. He underwent life-saving surgery for a condition called thoracic outlet syndrome, which was actually a birth defect. It’s a situation where the top rib sits too close to the collarbone.

Because of the major vein that runs through there, every time Church would raise his arm, it would create a situation where the vein would get pinched and become damaged.

The life-threatening  clot was where it tried to heal. But it kept backing up, backing up. Like any clot, when it gets enough pressure, it will explode.

Church was told by the doctors he was a lucky man. Most of the time when this condition is discovered in a man his age, it’s when the person has fallen over the shower, dead.  The vein has already burst.

Three days out and Church was back in the saddle. He had additional surgery to have his top rib removed. After a period of rehab and intensive physical therapy, the superstar was back on tour.

Impact On His Playing

The good news? Not only is Eric Church healthy now, the removal of his rib had no effect on his guitar playing. More good news? He said his golf game is better than ever. THAT is a positive attitude!

Now, sit back and listen to one of Eric Church’s many hits, “Desperate Man.”

Any thoughts about what Eric went through?