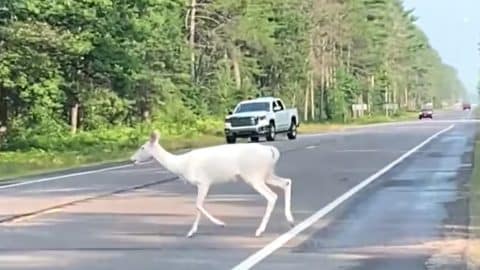 A couple of brothers were driving through Manitowish Waters, Wisconsin on vacation when they drove up on an albino deer crossing the road.

“AMAZING! These Wisconsin brothers managed a close look at an albino deer as they vacationed near Manitowish Waters, Wisconsin,” WBRC FOX6 News wrote in the description of a video shared on Facebook.

The video showed the men driving down a rural road with bushes and trees on both sides of the road. As the men slowed the vehicle down, they filmed the albino deer walking out of the brush and towards the road.

The magnificent creature made its way to the road and cautiously began to cross as another oncoming vehicle also slowed down and pulled over to watch.

It was impressive to see just how white the deer was. It quickly made it to the other side and began to munch on some leaves before disappearing into the wilderness. It was a rare sight indeed and super cool that it was all recorded on film.

According to Protect The White Tail Deer, an albno deer is “Exceedingly rare! In fact, the chances of an albino deer being born are about 1 in 20,000. Percentages will be higher in states like Wisconsin where the white deer are protected. In states where they are not protected, the number could be far less (only 30 of the 50 states even have recorded sightings for albinos).”

Watch Footage The Albino Deer Below