By Miranda Raye on April 13, 2020
Advertisement 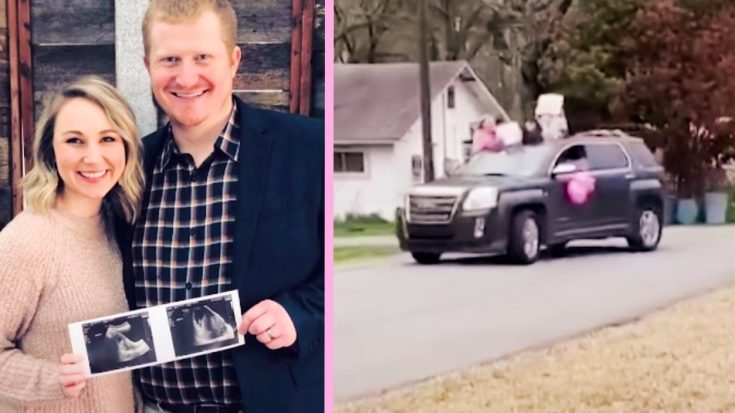 The COVID-19 pandemic has put the whole world on pause. People have been forced to cancel or postpone celebratory events such as baby showers, weddings, and more.

In Jennifer and Dustin Sanders’ case, the couple was forced to cancel their gender reveal party that was supposed to include their family and closest friends.

The couple shared their story with The Kelly Clarkson Show, which has temporarily ceased filming due to the pandemic. But the show continues to share new content online, including the Sanders’ story.

As Dustin explained, he and Jennifer experienced a lot of “heartaches and troubles” while trying to conceive. So when they finally learned they were expecting, they were overjoyed…and so were their friends and family.

The couple planned to host a gender reveal party to celebrate with their loved ones, but had to cancel due to the current social distancing guidelines and restrictions on large events. Since they couldn’t have a party, Jennifer and Dustin chose to share their baby’s gender through a Facebook Live video.

Jennifer and Dustin each held a confetti cannon and shot them off in their dining room, revealing tons of pink confetti. It’s a girl!

The couple said they plan to name their baby girl Madeline Grace.

After hosting their online gender reveal, Dustin said he and Jennifer got a call asking if they could step outside for a second. Much to their surprise, they were greeted with a drive-by gender reveal party.

“…there was a parade of our closest friends and family, and dozens of cars that were just going around our house that were decorated in just, pink girly stuff,” Dustin said. “Because they just wanted to show us love.”

Needless to say, the couple was touched by their friends and family members’ efforts to celebrate their gender reveal with them. “That outpouring of love was just incredible,” Dustin said.

You can watch Jennifer and Dustin share their story and see the footage of their gender reveal parade by tuning in to the clip below. Congratulations to them on the upcoming arrival of their baby girl Madeline Grace!