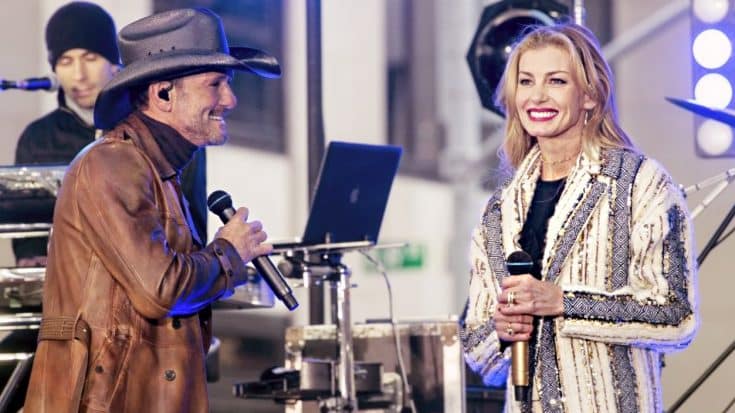 Back in 2016, Tim McGraw and Faith Hill were immortalized as two of country music’s greatest when each of them received a star on the Music City Walk of Fame in Nashville. That huge honor was followed up with an exhibit about the couple in the Country Music Hall of Fame and Museum, which just closed on June 10.

On top of all of that, McGraw and Hill have spent the past couple of years traveling on their joint Soul2Soul Tour, during which they sing all of their hits as well as new material from their 2017 duets album, The Rest Of Our Life.

The tour is currently in full force, placing McGraw and Hill’s names directly in the spotlight. Soon, Hill’s name will appear somewhere else…a place that is arguably the most famous “walk” in the world.

As mentioned earlier, both McGraw and Hill received stars on the Music City Walk of Fame in Nashville in 2016. But years prior, it was only McGraw who had a similar honor granted to him.

On October 17, 2006, McGraw achieved one of the entertainment industry’s greatest accomplishments when he was issued a star on the Hollywood Walk of Fame. But Hill went without one for the time being.

Finally, over a decade after her husband, Hill is set to receive her own star on the Hollywood Walk of Fame. The announcement was made on Tuesday (June 26) that Hill is part of the 2019 class of inductees.

Tim Takes Time To Gush About His Wife

McGraw and Hill never pass up a chance to brag about each other, especially when one of them achieves something spectacular. Hill’s upcoming induction on the Hollywood Walk of Fame is certainly something to be proud of.

Taking to Instagram, McGraw shared a photo of his wife rocking out on stage during one of their shows. His congratulatory message was short, but perfectly showcased how much he admires her.

“Proud of this badass Mississippi girl!” he wrote.

Proud of this badass Mississippi girl! Congrats @faithhill for being selected as an honoree for the Hollywood Walk of Fame’s Class of 2019!

With over 40 million records sold worldwide and several Grammy Awards to her name, there’s no arguing that Hill deserves a star on the Hollywood Walk of Fame.

Congratulations to Hill on her remarkable accomplishment!