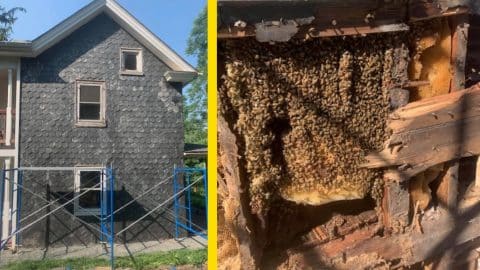 Sara Weaver and her husband purchased their dream farmhouse built in 1872 in Skippack Township, Pennsylvania last fall and received a big surprise the following Spring.

“I knew it was big. I didn’t realize how big it was,” Sara told ABC.

When they first purchased the house, Sara said the market was so competitive that they didn’t do an inspection in order to clear the home of any issues.

“On the seller’s disclosure, it said, ‘bees in wall,’ and we didn’t ask any questions about it – which in hindsight was not the wisest thing to do,” Sara said.

That was a mistake they would later pay for…big time. Everything was all calm, cool, and collected during the fall and winter but when the weather started getting warmer the honeybees started to appear around the home.

“The Bee Man,” Allan Lattanzi said he has been speaking to the previous homeowner for years and she told him she did not want the bees to be removed.

He said she explained to him that they’ve been living there for 35 years plus and she did not want them bothered. However, when Allan used thermal imaging cameras to show the new homeowner how massive the colony of bees was, she immediately wanted him to remove them.

“The one massive colony was the entire staircase in size, and that’s when I knew this was big,” Sara told news reporters.

Sara said that Allen has been removing the bees for months and so far he has had to remove an entire wall to get them out.

Sara and her husband will have to pay over $12,000 to fix the problem but she said that’s not a problem. She has wanted a home in this school district for six years and she would buy the house and pay the cost for things to be fixed if she had to choose again.

Video On The Bee Invasion Incident Below