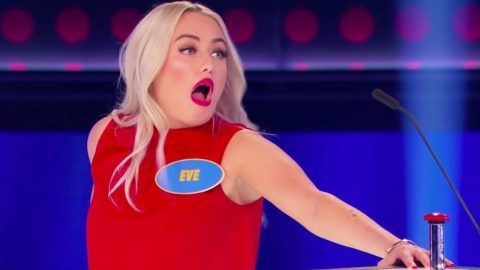 It’s not often that a Family Feud game goes to sudden death.

But after a lot of back and forth on the Canadian version of the popular game show, the Dubois family from Lorette, Manitoba and the Tomlin family from Waterloo, Ontario were tied going into the Fast Money round.

Host Gerry Dee explained to both families, the audience, and viewers at home the rules of the sudden death round.

He said, “Real simple. There’s one question. Only one answer. Whoever gets it, you’re playing for $10,000. That’s it. Whoever gets this wins the game.”

Dee brought one player from each family up to the podium and told them to “Name Popeye’s favorite food.”

Before he could even finish the question, Eve, the member of the Lorette family, buzzed in a confidently yelled, “Chicken!!” She also gave a dance that Dee mimicked a couple times.

Dee had a speechless look on his face, while the woman began cheering, thinking she said the correct answer. Little did she know, he was talking about the cartoon character Popeye, not the fast food restaurant.

The man representing the Tomlin family took advantage of the woman’s gaffe and correctly stated that spinach is Popeye’s favorite food.

I would like to see a modern day Popeye The Sailor Man directed by Michael Bay. #popeyes pic.twitter.com/AzBWq2Sx12

After figuring out she was wrong, the woman went up to Dee and said, “I thought you meant Popeye’s Chicken!”

She lost her family $10,000, but earned herself a spot on the list of viral videos for the year 2020. Check out a couple of the many Twitter reactions below.

Gotta love the "I'm blonde" response as she's getting roasted by her family pic.twitter.com/r7eDMrjEWd

Make sure to press play on the video below to watch it!