Family Forms Human Chain To Save Sister From Tornado 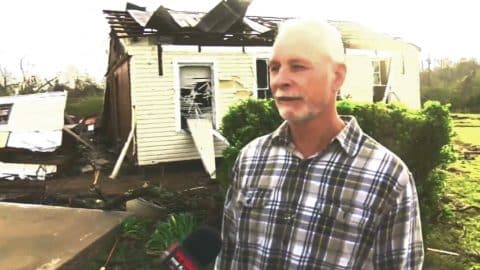 A family in Clinton Country, Alabama worked together to form a human chain in order to save their sister from being sucked away by a powerful tornado.

“My family’s safe,” he told FOX8. “We’re OK. Nobody got hurt. That’s all that’s important. The Lord got us through this, and we just give him all the praise.”

Tommy Cox who lived through the surreal experience said that strong winds were roaring outside and he was in his basement when it all started. His sister pulled up to her house that was right beside his (before the tornado destroyed it) and got out to rush inside the house.

The fierce winds were too much for his sister who was exiting her car and heading towards her basement. That’s when Tommy’s son, who was next door watching, ran out of his home in an attempt to help her but they both were, unfortunately, overtaken by the strength of the wind.

Another family member came out next after them and they all formed a human chain that was able to get them to the basement door. After everyone got inside, they all went to a safe spot in the corner of the basement to hunker down.

“And then it hit,” he said. “It hit. Stuff started flying, busting through the walls in the basement and doors. It was just chaos.”