Fan Postpones Wedding To See Garth Brooks – And He Noticed 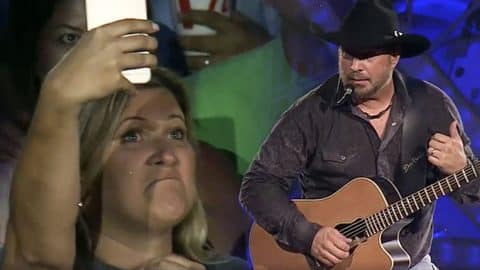 One bride-to-be served as quite the distraction when her homemade sign caught country star Garth Brooks‘ attention and prompted him to approach her from the stage.

Thanks for rockin’ the FIRST concert at Notre Dame Stadium, @garthbrooks!

You’ll always have friends in Irish places — especially with a guitar like that! ?☘️#GARTHatND #GoIrish pic.twitter.com/cHubodvRbr

“You gotta explain this to me because I hope this sign is not true,” Brooks said, baffled by the young woman’s sign that read, “I postponed my wedding to be here.”

After reading the sign out loud, his fans cheered, as though they would do the same thing! He continued saying, “And your maid of honor has a sign that says, ‘You need a restraining order from her’!”

That sign actually had arrows pointing to the bride!

Country stars @garthbrooks & @trishayearwood send wedding gifts to fans they saw with a sign at their concert. https://t.co/EeOjbg3foR pic.twitter.com/yTkHKRanqO

Brooks got a good laugh at both signs, treating the woman to a special performance dedicated to her and her absent fiancé, Ken. He began a sweet serenade of his song “She’s Every Woman,” although the performance was cut short when the woman held up yet another risqué sign that had the country icon chuckling on stage and halting his performance yet again.

After coming close to crying from laughing so hard, Brooks regained his composure and announced, “I’m singing the wrong song for you then, honey.”  After that realization, he broke into the song “That Summer,” sending the woman in the spotlight and surrounding fans into a wave of excitement.

Be sure to watch the hilarious encounter below!

Things got SO wild in Louisiana, even Garth was speechless…but he did have a song for it!!! Get ready for #StudioG tonight. -Team Garth