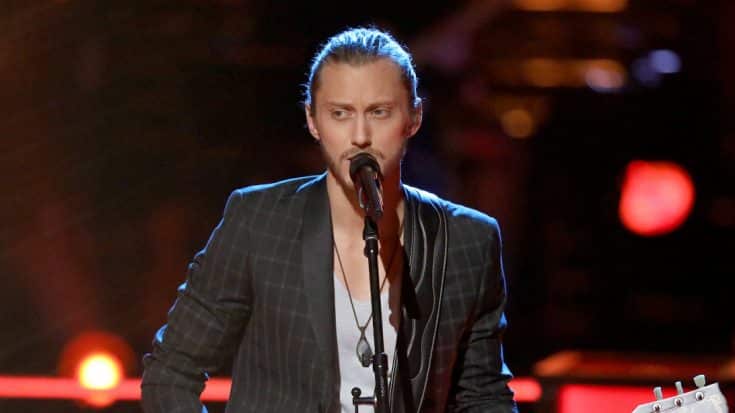 The Voice fans were shocked to learn Monday night that one of the season’s frontrunners had left the show due to “personal reasons.” Kelly Clarkson shared the news that one of her team members, Cody Ray Raymond, had dropped out of the competition just before the Knockout Rounds.

Raymond wowed judges Kelly Clarkson and Jennifer Hudson during his Blind Audition when he sang “Born Under a Bad Sign.” The  ultimately chose to join Team Kelly and dominated his performance during the Battle Rounds when he went head-to-head with fellow Team Kelly member SandyRedd as they sang Solomon Burke’s “Cry To Me.”

So why did Raymond quit when he was doing so well? The reason is unknown, but the 27-year old Seattle native posted a vague note on social media a few days ago about his departure from the show.

“To all my supporters and new fans, thank you all for the love sent my way on my journey so far, but due to personal matters my chapter with The Voice has come to an end. I’m well and my family is well. Stay tuned for new music coming! Sending love right back,” the post read.

The news left fans baffled and many took to social media to question the singer’s decision.

Be honest…. Is it because the shows format or show biz too demanding? Ur fans wana know… U were a frontrunner & to just leave like that is shady! Makes no sense & to say "personal reasons" is a cop out! U took a spot someone else should've got! #TheVoice #VoiceKnockouts

I am acutely crying at the fact that @codyrayraymond had to leave the voice for personal reasons?I hope everything is okay. You are such an amazing singer and I could definitely see you going far on @TheVoiceABSCBN I love you Cody!❤️?? I hope you come back next season!?

Raymond’s departure isn’t the first time that a contestant has quit The Voice mid-season. During season 14, Hannah Goebel received a 4-chair turn during her Blind Audition, and ultimately chose to join Kelly Clarkson’s team. But, Goebel exited the show just prior to the Battle Rounds. Her reason for leaving was similar to Raymond’s, according to a post made to social media at the time.

“As many of you have now heard, I left this season of The Voice due to personal reasons,” Goebel wrote. “I want to assure everyone that I am well; I still have my voice and am looking forward to a long music career and recording original songs in the near future.”

Whether it was the pressure of national television, overwhelming commitments, or simply that he realized The Voice wasn’t for him, Cody Ray Raymond has a bright future ahead of him, with or without The Voice.

Our thoughts are with Cody Ray Raymond and we wish him the very best on his music journey. We look forward to hearing more from him in the future.