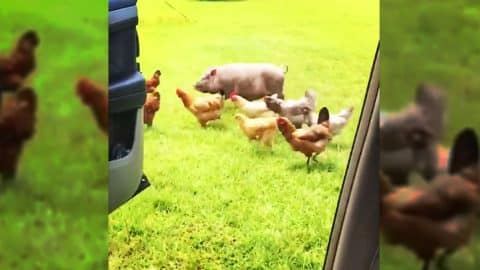 If you have been on the Internet, chances are you have seen a little something called the “In My Feelings Challenge.” The latest challenge, which follows other viral dance challenges like the “Mannequin Challenge,” the “Running Man Challenge,”  and the “Harlem Shake,” was originated by Instagram user The Shiggy Show.

He danced to the chorus of rapper Drake’s song “In My Feelings,” which features the lyrics, “Kiki, do you love me? Are you riding?/Say you’ll never ever leave from beside me/’Cause I want ya and I need ya/And I’m down for you always.”

Each line of the chorus was accompanied by choreographed dance moves, but also given enough flare that people could make the dance their own. The Instagram user posted his original video on June 26 and it has been viewed over 6.5 million times.

Since then, everyone has been doing their own version of the In My Feelings Challenge from everyday people to A-list celebrities, and everyone in between. Although The Shiggy Show’s version is of him dancing on a basketball court, people have taken it up a notch and done the challenge after getting out of a car, and sometimes that car is still moving!

We have seen several incredible challenges, but the one that Lindsey Berry posted on her Facebook page takes the cake. She did the version where she filmed from a moving car, but it wasn’t a person that was doing the challenge, it was a herd of animals!

A pig, some chickens, and a even a dog made their debut in Lindsey’s video taken from her point of view in the driver’s seat. She captioned the video, “Farm Edition: you’re welcome.”

Watch the full video below and get ready to laugh!