By Manly Bryant on June 5, 2019
Advertisement 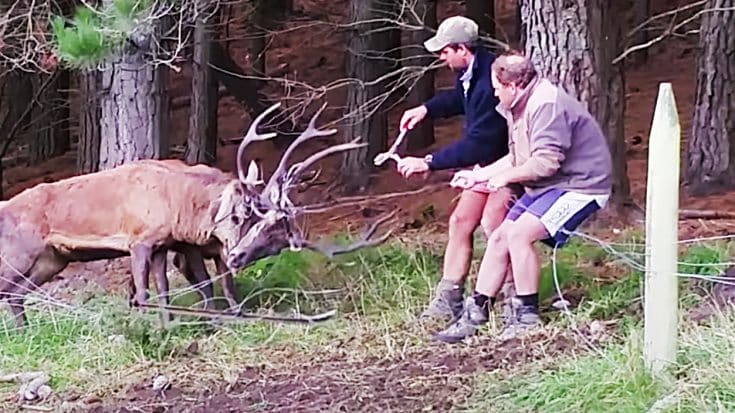 Apparently, two farmers, Jim Burrows and Richard Gorman stumbled upon the deer battling it out with one another and somehow got tangled in the fence’s wiring. Well, we assume they were fighting because it was mating season at the time (late-March through April) and it’s well known for them to lock antlers like this.

The video starts off with the deer just going at it, pushing each other back and forth at full force, and we’re guessing that they eventually got tired because the scene cuts to both deer kneeling down on the ground even more stuck in the fence than they were before.

Heroes To The Rescue

One man walks over to the deer with wire cutters in hand in attempts to cut them loose. The deer was clearly nervous and continued to battle it out, or maybe they were just trying to get away so the guys backed off until they stopped again. Eventually, they paused the fight, which gave the men a chance to try and cut them loose.

Finally, after an intense standoff, they were able to cut one of the deer loose and it took off running full blast into the forest. The other deer continued struggling in the barbed wire until it exhausted itself to the point where the men could help it again.

At last, they got the remaining deer loose, and it did the same thing as the first deer, quickly ran off into the woods. It was incredible to witness, and those guys became instant heroes on social media once the video was posted. The deer would have died if the guys didn’t save them.

Farmers Untangle Bucks Who Were Stuck Together

These two deer were stuck together by their antlers — until these guys came along ???