Film Of Skynyrd’s ‘Farewell’ Concert In Jacksonville In Theaters 1 Night Only – Nov. 7th

By Miranda Raye on October 24, 2019
Advertisement 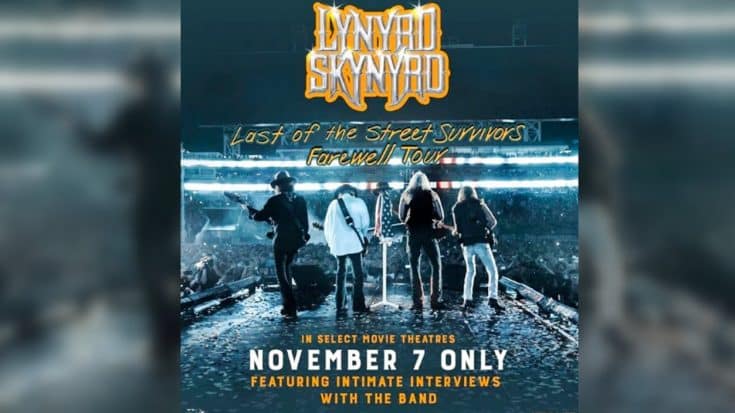 In early 2018, Rock and Roll Hall of Famers Lynyrd Skynyrd announced that after decades of performing, they were embarking on their Farewell Tour.

Called the Last of the Street Survivors Farewell Tour, the venture kicked off in May 2018 in the group’s native state of Florida. Artists such as Kid Rock, Hank Williams Jr., and Charlie Daniels signed on to participate in some of the group’s final shows.

Just announced a lot of great support for The Last of the Street Survivors US tour. Take a look at your local listing and let us know who you’re excited to see. lynyrdskynyrd.com

Even though Skynyrd announced their Farewell Tour, they didn’t plan to just play a few shows and then stop. In fact, the tour is still going on right now, and the group has two shows remaining this year.

But with the number of tour dates dwindling down, those who missed the group on their final tour feel as though they missed out on a piece of history. Now, you have a second chance to witness that piece of history, but for one night only.

In early October, Skynyrd announced on its official website that a concert film called Last of the Street Survivors Farewell Tour would be coming to theaters on November 7th.

ONE NIGHT ONLY, Lyve from Jacksonville – Fathom Events is giving you the exclusive opportunity to see Rock & Roll Hall…

The film, which was directed by Shaun Silva and Tacklebox Films, captured the group’s 2018 concert in their home city of Jacksonville, Florida. They played at TIAA Bank Field, which serves as the home to the Jacksonville Jaguars.

In addition to concert footage, the film will also include interviews with the band members. They’ll speak about their experiences on tour and what performing as a band has meant to them.

Guitarist Gary Rossington, the only surviving founding member of the band, had this to say about the film and his experience on the Farewell Tour:

“We can’t wait to share this amazing night and performance with the Skynyrd Nation, especially those that weren’t able to be there that evening,” Rossington said. “The energy, passion and reaction to the music and band was something we will never forget.”

As previously mentioned, the Last of the Street Survivors Farewell Tour film will only be playing in theaters for one night, November 7.

Tickets for the film are on sale now, and it may be a good idea to buy them in advance. Why, you ask? Because the film is only showing in select theaters, so seats are limited for the one-night event.

You can click here to see if a theater near you is playing the film, and from there you can also purchase your tickets.

This is a once-in-a-lifetime event you don’t want to miss!

Head below to catch a short clip of Skynyrd’s live performance of “What’s Your Name,” which you’ll be able to see in the film! You can also learn more about the Last of the Street Survivors Farewell Tour film by tuning in to the second video below.

Lynyrd Skynyrd’s “Last of the Street Survivors Farewell Tour ” film is coming to select theaters near you on November 7th – don’t miss your chance to witness this important piece of music history! Tickets WILL sell out fast for this legendary, one-night event, so get yours now by clicking here!