By Miranda Raye on August 19, 2019
Advertisement 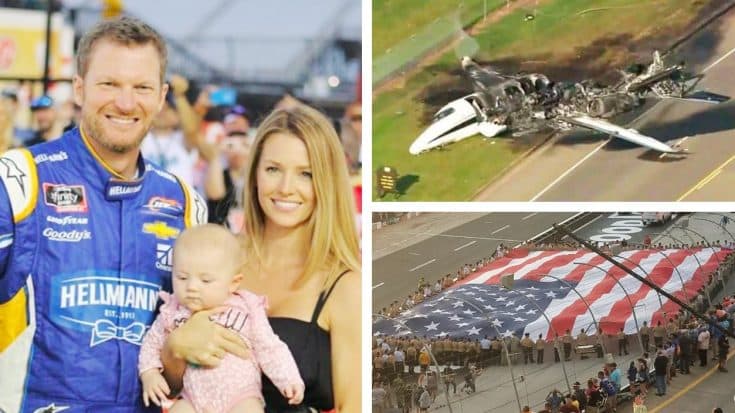 On August 15, Dale Earnhardt Jr. and his family were involved in a fiery plane crash at the Elizabethton Municipal Airport in Tennessee. Dale Jr., his wife, Amy, their one-year-old daughter, Isla, two pilots, and the Earnhardt family dog were on board at the time of the crash.

Federal Aviation Administration officials spoke to ESPN soon after the crash. The FAA said that the crash occurred when the Earnhardts’ private plane rolled off the end of the runway after landing and then caught fire.

“The airplane basically bounced at least twice before coming down hard on the right main landing gear,” Ralph Hicks of the National Transportation Safety Board toldABC 7 / WSOC-TV. “You can actually see the right main landing gear collapsing on the video. The airplane continued down the runway, off to the end, through a fence and came to a stop behind me here on Highway 91.”

“The plane was sliding down to the road, it was already in flames and smoke billowing.” – Witness to @DaleJr's plane crash: https://t.co/QvUxMYyuna #NASCAR

Thankfully, everyone made it safely off of the plane and no one was seriously injured.

Since retiring as a NASCAR driver, Dale Jr. has served as a NASCAR analyst for ESPN. He and his family were traveling to Bristol to cover the weekend’s race when the plane crash occurred.

Because of the crash, Dale Jr. took the weekend off to spend time with his family. But even though he wasn’t in Bristol to cover the race, his presence was still felt.

NASCAR chose to honor the first responders to Dale Jr.’s crash by giving them all free tickets to the Bristol race. The Carter County Tennessee Sheriff’s Office thanked NASCAR for the generous offer in a post on Facebook.

“We had a great time with our first responder family at the BMS night race!” the post read. “A big thank you to NASCAR for giving us and all the agencies that responded to Dale Jr.’s plane crash free tickets!”

We had a great time with our first responder family at the BMS night race! A big thank you to NASCAR for giving us and all the agencies that responded to Dale Jr.'s plane crash free tickets!

We’re glad to hear that all of the first responders enjoyed themselves at the race! That was so kind of NASCAR to treat them to free tickets for their remarkable acts of heroism.

The plane crash that Dale Jr. and his family were involved in must have looked terrifying to the first responders who arrived on the scene. You can watch footage from the aftermath of the crash by tuning in to the video below.

We’re so grateful that Dale Jr., his family, and the pilots are all alright after the crash. We’ll continue to keep them in our prayers.

Oh God! Terrifying video shows #DaleEarnhardtJr and his family running out of their plane after it crashed pic.twitter.com/7ojIr0o3JR