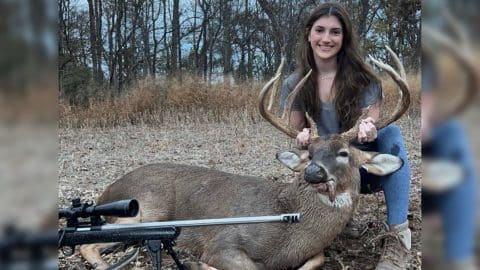 While she was hunting with her boyfriend, Ruan Naude, Mikaela Mengarelli from Boyle, Mississippi was a first-time deer hunter when she secured her first kill on Dec. 5, 2021.

Mikaela, who is a medical student and spends most of her time studying and working at the hospital, doesn’t have much time for anything else. However, on this day, she took a break from her busy schedule to go have some bonding time in nature.

The two went out to hunt on her uncle’s property along the banks of the Sunflower River in west-central Mississippi. She said it was about 3:30pm when she and Naude finally stopped in some heavy grass that overlooked a field and a riverbank.

Even though it was Mengarelli’s first time hunting for deer, she was very well equipped and prepared for the hunt. She had spent some time at the rifle range shooting her Browning 6.5 PRC and was confident that she could hit a deer if she saw one within range.

As they waited for a deer to come, they spotted one from far away, which they thought was a doe at first.

Once it got closer and stepped out into the open, they realized it was a heavyweight buck with an oversized rack and Mengarelli blasted a clean shot from 150 yards away.

When the bullet hit the buck, it just stood there, so she quickly chambered another rifle round, aimed, fired, and the buck dropped after getting hit with that second round.

They then walked to where the buck was and found it lying dead in the grassy field.

It was certainly a massive buck for any hunter to shoot, especially a hunter who is in the field for the first time. Mengarelli said, with the help of her uncle Rodney Walker, the buck’s head will be mounted on the wall.