Fish With Horrifying Human Teeth Found At The Beach 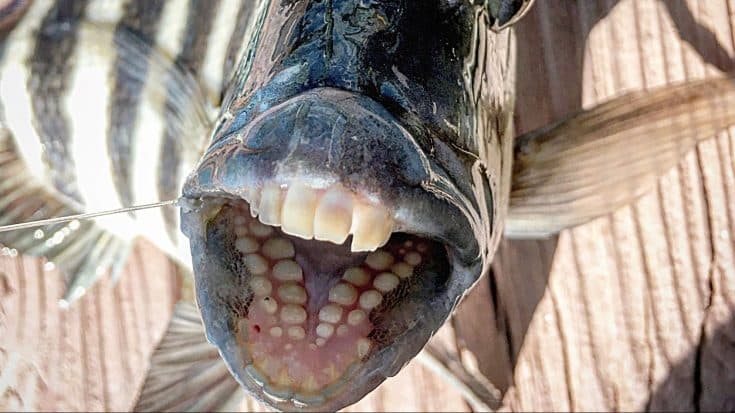 The Fish With Human Teeth

It was a beautiful day for the beach in Georgia when a young 31-year-old mother, Maleah Burrows, was taking her daughter out for a walk. They were walking near the ocean waters, toes in the sand when Maleah noticed a fish had been washed ashore in the distance.

“We were just walking along the beach and it was washed up far from the shoreline and caught our attention. I originally just thought it was a plain old fish – nothing exciting, but I still wanted to show my three-year-old. Then as we got closer I saw all the teeth and I was shocked because I’d never seen anything like it,” Maleah said.

Maleah and her daughter walked up to the fish and noticed something spooky… it had teeth! Not just any type of teeth either, it had human-like teeth. This was a bit shocking for Maleah and her three-year-old daughter.

They took photos to show people because it was such a weird thing to see and when people saw the images they responded that it looked like a Sheepshead Fish, also known as the Archosargus Probatocephalus.

What Is A Sheepshead Fish?

Sheepshead Fish is a type of saltwater fish that grows up to 30 inches in length. They are found in coastal waters along the western Atlantic, ranging from Brazil to Florida. It’s not surprising that this fish was found off the beach of Georgia because they are known to be most concentrated around Florida.

This type of fish eats oysters, clams, crabs, barnacles and other types of crustaceans which makes sense why it has teeth. It’s known for having several stubby rows of teeth that closely resemble human teeth. No one knows exactly where the name “Sheepshead” comes from but the rumor is they call it that because the fish’s teeth resemble sheep’s teeth.

Regardless, it would be a spooky situation if anyone walking on the beach stumbled upon this.