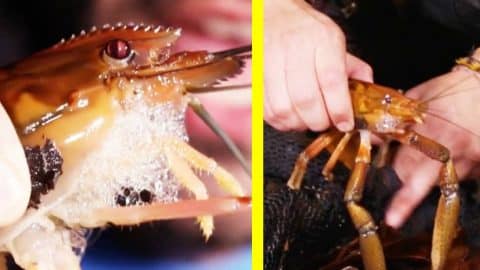 Seafood lovers everywhere are delighted when they find jumbo shrimp on ocean side menus, but even the biggest shrimp enthusiasts have never seen a prawn quite like this. Officially known as freshwater prawns, these giant shrimp can grow up to a foot and a half long!

A post shared by The Undercover Food Critic (@the_undercover_food_critic)

There are several ways to prepare giant freshwater prawns. Many shrimp enthusiasts enjoy them grilled, while others prefer to have them mixed in with another flavorful option, such as Pad Thai.

Freshwater prawns have large claws, and many shrimp enthusiasts say that when claw meat is cooked just right, it tastes similar to crab.

The bright yellow head of freshwater prawns makes them a bit more of a delicacy than saltwater shrimp, as it melts into a butter-like consistency that perfectly complements the light, delicious texture of the prawn meat — some even compare the taste of a prawn head to that of lobster.

The Facebook page Brave Wilderness took their 500,000 or so followers on a journey to find the biggest shrimp ever, and they didn’t disappoint. The fisherman, who goes by the nickname “Coyote,” showed off the massive catch, which they labeled as a “monster” shrimp, and once you see it in the video, you’ll understand why!

Watch Coyote catch this massive shrimp in the video below!