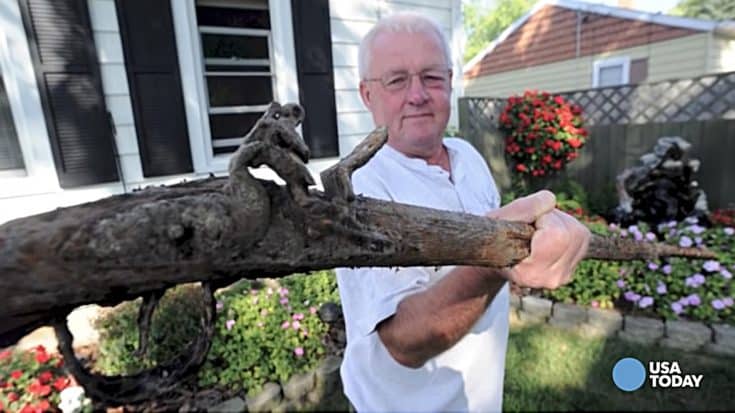 Ray Groff, an experienced fisherman was out fishing on Lake Winnebago when he found something truly amazing. He found it when he was pulling up his anchor to move the boat to a different spot and felt the anchor was caught on what he thought was a branch.

He finally got the anchor pulled up and at the end of it was a flintlock musket, weathered and rusted but still intact. “This is crazy. It’s like one of those tall fish tales,” he said as he held up the early-American treasure.

The gun had a 47-inch heavy iron barrel with a flint rock still logged in the corroded firing mechanism. Some of the wooden stock was eaten away from being there so long, but for the most part, was still intact.

Ray did some research online and found out the flintlock was similar to the ones used in the 1700s and early 1800s, meaning this gun was probably over 200 years old!

How Did It Get There

When Ray was researching he also found out that two Frenchmen built a trading post on the river to trade with the Native Americans. He’s thinking that whoever lost it must have been traveling in a canoe that overturned or maybe someone traveling over ice broke through and lost it. The true story will forever be a mystery.

Ray says he’s been fishing on this lake for 40 years and this is the coolest things he’s ever caught. For now, he’s decided not to restore the gun but will leave it the way it is: old, weathered, and mounted on his wall as his prize catch.