Fisherman Reels In Croc Instead Of Fish

By Manly Bryant on October 27, 2020
Advertisement 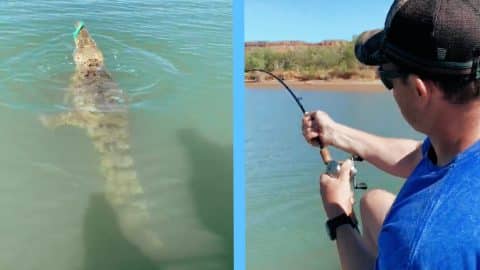 A video of a fisherman accidentally reeling in a crocodile in the northern region of Australia has been circulating on social media.

Shared on Facebook by Rod & Rifle TackleWorld Katherine, the video shows a man standing on a boat with his fishing rod bent at a ninety-degree angle appearing to be hooked onto something heavy.

As the camera points at the fishing line that’s fading into deep murky green water, all of a sudden, a full-grown crocodile comes floating to the surface of the water. The fisherman’s massive lure was hooked to the snout of the croc and it did not like it.

The croc aggressively tried to swim away, diving as deep as it could but the fisherman wanted his lure back and continued to reel it in. Eventually, the lure somehow unattached itself and the croc swam off. The fisherman reeled in the lure and held it up to the camera to show the damage that had been done to it.

Rod & Rifle TackleWorld Katherine wrote on Facebook, “Here we were just trolling along with a classic 200 and this fella decides he wants to have a crack at it. Managed to get the lure back! Although it doesn’t track as straight as it use to. Rod – Samaki XT scale 6’ 12-20lb. Reel – shimano Calcutta 250 TE DC with 50lb fins braid and 80lb Schneider leader.”