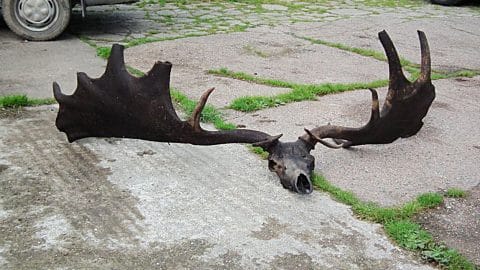 Raymond McElroy and his assistant Charlie Coyle were out fishing in Ireland when they pulled up a massive 10,500-year-old extinct Irish elk skull.

It happened September 5th, 2018 on a freshwater lake called Lough Neagh when they were casting their nets in water no deeper than 20 feet, about a half a mile from shore.

“I was shocked to begin with when I got it over the side [of the boat] and saw the skull and antlers.” Raymond said.

The antlers spread an impressive 6 feet wide and even though it was submerged in the lake for no telling how long it was still very well intact. Raymond contacted the local historian, Pat Grimes who drove over to inspect it and take a few pictures.

History Of The Irish Elk

The Irish elk has been extinct for over 10,500 years and is one of the largest deer that ever lived, typically weighing around 1300 pounds. It normally stood about 6 foot 9 inches tall at the shoulders and had antlers that could grow a gigantic 12 feet wide.

The bones of the creature have mostly been found in Ireland’s lakes and marshlands which is why it got its name, the Irish elk. However, it was known to have lived all over Europe, Asia and northern parts of Africa.

Watch The Interview Below