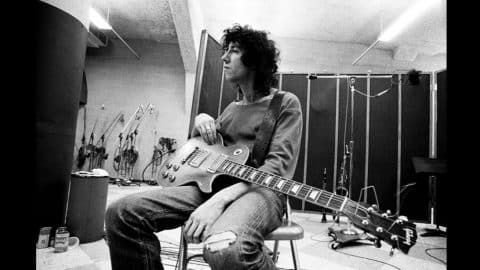 Peter Green, an English blues guitarist and singer-songwriter who co-founded Fleetwood Mac, has died. He was 73.

A statement issued on behalf of his family states: “It is with great sadness that the family of Peter Green announce his death this weekend, peacefully in his sleep. A further statement will be provided in the coming days.”

Green formed Fleetwood Mac in 1967 alongside drummer Mick Fleetwood. Green penned numerous songs for the band, many of which appears on Fleetwood Mac’s first three albums. Green left the band in 1970 after struggling with his mental health. He was eventually diagnosed with schizophrenia in the mid-70s and spent time in psychiatric hospitals.

He was inducted into the Rock & Roll Hall of Fame in 1998 along with eight members of Fleetwood Mac, including Mick Fleetwood, Stevie Nicks, Lindsey Buckingham, John McVie, Christine McVie, Danny Kirwan and Jeremy Spencer.

RIP to Peter Green 'the Man of the World'. Thank you for all the years of music that will live on forever. Peter founded Fleetwood Mac back in 1967, but decided to name the band after his favourite rhythmic duo Mick Fleetwood and John McVie. He went on to have a solo career outside Fleetwood Mac. The Fleetwood Mac album Then Play On is marked as one of the highlights of his career.

Green’s guitar playing earned him recognition and as one of the “100 Greatest Guitarists of All Time.”  He was also praised by blues guitarist B.B. King who said, “He has the sweetest tone I ever heard; he was the only one who gave me the cold sweats.”

Friends and fans of Green’s took to social media to honor the late musician. Whitesnake guitarist Bernie Marsden shared a photo of one of his last meetings with Green, calling his his “hero.”

I can’t quite express my feelings this afternoon after learning of Peter’s death. I’m just thinking of the times we spent together in the last couple of years, hanging out with him at his home was very special. A memory I’ll cherish. He made me laugh, cry, wonder, and never failed to make me pinch myself when we were alone one to one. There I was, sat with my hero. As a musician I can only be one of the millions he touched, his talent for guitar playing, vocals and harmonica would have been more than most people could have possibly wished for, and then you add those wonderful songs, original, vibrant, atmospheric, outright psychedelic and so much fun, to listen to and witness. Those early days of Fleetwood Mac will stay in my mind forever. Many more words will be written and spoken about Peter, but I will – very simply – just miss him. This photograph was taken at his house in February – the day of the London Palladium show. He was in a cheeky mood, and when I asked him if he would like to have been in London, he shrugged a little, gave me a smile and said, ‘No, I’m having a cup of tea with you.’ He made great tea. Of course. RIP PG. BM ❤️🎸