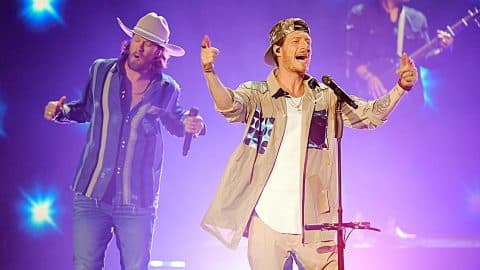 The country crooners that were nominated for “Duo of the Year” performed their hit song “I Love My Country” live from Music City at the iconic Grand Ole Opry.

Ever wanted to see @floridageorgialine live at the @opry? Now's your chance! Catch the ACM Duo Of The Year Nominees as they perform at the 55th #ACMawards on Wednesday, September 16th at 8/7c on @cbstv.

“I Love My Country” was released at the end of March 2020 and is Florida Georgia Line’s first single from their upcoming fifth studio album.

Florida Georgia Line is nominated tonight for “Duo of the Year” along with Brooks and Dunn, Brothers Osborne, Dan + Shay, and Maddie and Tae.

This is the first time in its 55-year history that the ACMs were held in Nashville! The country music award show began in Los Angeles, California until 2003 when it made the move to Las Vegas, Nevada. From 2003 on Las Vegas was consecutively the awards show home, with the exception of the 2015 50th Anniversary of the ACMs that were held in Arlington, Texas.

The 55th ACM Awards were scheduled to take place in Las Vegas in April 2020, however, the pandemic forced the show to be rescheduled.

Watch Florida Georgia Line’s 2020 ACM performance of “I Love My Country” below.

It wouldn't be the #ACMawards without an amazing @FLAGALine performance! West Coast, the #ACMawards are about to start on @CBS… don't miss it! pic.twitter.com/5AIirDzS9F