By Manly Bryant on October 6, 2020
Advertisement 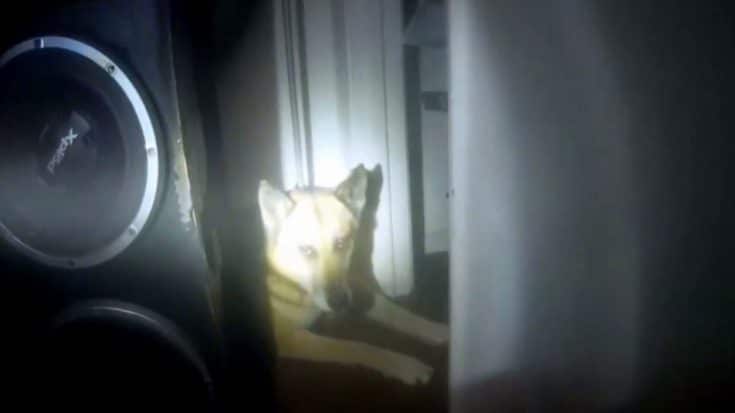 On February 10th, 2016, the Sacramento Fire Department responded to call they got at around 4am about a house fire that had broken out.

When they arrived on the scene, multiple firefighters were wearing cameras on their helmets as they entered the home.  The Sacramento Fire Department wrote on Facebook that the Saw firefighter and the Apparatus Operator firefighter grabbed a latter to go up on the roof and cut a hole for ventilation while others went inside.

The Tools firefighter and the Captain were the guys who decided to search through the home to look for any remaining victims. Luckily, they did the search because the homeowner’s pet German Shephard was still in there hiding behind a big speaker.

The fighterfigter calmly talks to the dog, telling her “come here” as he attempts to remove it from the burning home. The pooch was well-mannered and followed the officer outside where she was reunited with its owner.

“The occupants of the home all got out safely, due to a working smoke detector, and the dog was reunited with her happy owner on the sidewalk outside,” Sacramento Fire Department wrote on Facebook.

Take A Look At The Footage Below

DOG RESCUE: Helmet Cam footage from an early morning house fire today shows two perspectives on Truck Company operations. Upon arrival at a working house fire, the four-person truck company splits in half. The Saw firefighter and the Apparatus Operator ladder the building and go to the roof to provide vertical ventilation, cutting a hole in the roof to allow smoke and hot gasses to escape. The Tools firefighter and the Captain go inside the home to search for victims and help locate the seat of the fire. In this video, footage from helmet cameras from both the Saw and Tools firefighters from Truck 6 are interspersed to show these operations, culminating with the rescue of a dog from her hiding place in a back bedroom. The occupants of the home all got out safely, due to a working smoke detector, and the dog was reunited with her happy owner on the sidewalk outside.