By Jennifer Pernicano on October 23, 2018
Advertisement 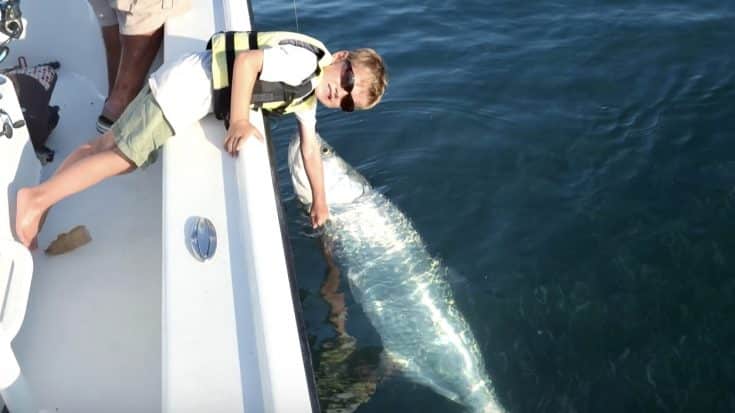 We all have those great memories of learning to fish when we were kids. The smell of sunscreen, polarized sunglasses, and itchy life jackets were all part of it – but nothing beat the feeling of hooking one. For one little boy, that feeling was 100 times heavier as he reeled in a fish that was bigger than he was!

Six-year-old Reed was having a pretty great day on his fishing charter. The boys had already reeled in a huge hammerhead, and now they were off to catch some tarpon.

For anyone who has ever fished for tarpon, you know they can be hard to hook. Between their ability to jump 10 feet in the air and their boney mouths – it normally takes a very experienced fisher to wrangle one of these guys in.

So when little Reed was the first angler to hook one, the professionals at BlacktipH were very impressed.

They posted on social media that, “Reed was the first angler to catch a tarpon. The fish was bigger than him! He is only 6 years old! I was very impressed on how he handled and fought the tarpon. His tarpon weighed over 100lbs!”

Reed had been using mullet as bait, a fish other boys his age start out learning to catch. But not this little angler, he went straight in for the big boys – and by big, we mean BIG.

The tarpon was a whopping 100 pounds that this little six-year-old reeled in! They decided to let the fish go because while tarpon is edible, there are thousands of tiny little bones in the fish that make it super difficult to eat.

You can watch the full action-packed adventure in the video below.