For The Last Time This Decade, A Blue Flower Moon Will Light Up The Sky 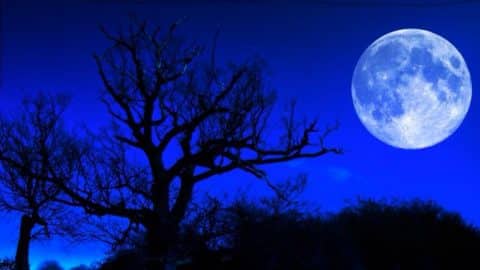 On Saturday, May 18 there is going to be a full moon, but not just any full moon. It is called a Blue Flower Moon.

May 18 the Blue moon . pic.twitter.com/Ezi4ET0JNF

You’ve probably heard the term, “Once in a blue moon.” For a long time, we just thought that meant something that doesn’t happen very often, which it does. But it also is a very specific way to tell how many full moons are rising in a certain season.

According to the Farmer’s Almanac, a Blue Moon is when one season, whether it be Fall, Winter, Spring, or Summer, has four full moons. The third full moon of that season is called a Blue Moon. A typical season usually just has three.

Saturday, you may get to see that 'Once in a Blue Moon' you've heard about. pic.twitter.com/aEp0j5L86D

Although the moon will not actually be blue, it will look quite large, and we won’t be able to see another Blue Moon until August 22, 2021, so make sure you set your alarms and go check out the last blue moon of this decade!

Here are the four full moons of this Spring season:

When Can You See The Blue Moon?

The moon will turn full at 5:11 EST, which means that is when it reaches peak illumination, but wait until the sun sets to really enjoy the beautiful Full Flower Blue Moon.

It is the second-lowest full moon of the entire year. The Old Farmer’s Almanac says that once the moon “reaches its highest point in the sky at midnight, it will still only be one third of the way up the sky.”

Today's news says that May’s Flower Moon (blue moon) officially turns full on Saturday, May 18, 2019, at 5:11 p.m. Catch the event that night after the sunset when the moon is high in the sky. #BlueMoon #moon pic.twitter.com/sFSUALpNvF

Why Is It Called A Flower Moon?

The May full moon has been called many things: Flower Moon, Mother’s Moon, Milk Moon, and even Corn Planting Moon.

It has all these names because the full moon in May meant “increasing fertility, with temperatures warm enough for safely bearing young, a near end to late frosts, and plants in bloom,” according to The Old Farmer’s Almanac.

For anything else you need or want to know about the rare moon this Saturday, watch the video below.