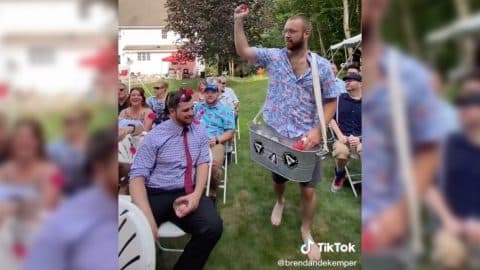 Brendan who goes by the TikTok name @dekemp shared a funny video on his account showing a very unusual wedding where the flower girl was replaced with a beer boy.

He filmed his friend who was walking barefoot down the aisle of his wedding wearing a summer shirt, shorts and had a bucket hanging around his neck that was filled with flower petals and beer.

He did the classic walk from one side of the aisle to the other and casually handed a beer from one person to another before grabbing a handful of rose petals and throwing them at the guests.

The crowd laughed each time as they watched him hand out a can of beer and shower participants. Some people commenting on the video even said that it was “iconic.”

A few times, the beer boy would even throw the beer over several people’s heads to an eager guest. When he finished his duty, he then walked over to the groom and threw the biggest double handful of rose petals on the groom before giving him a friendly hug.

Check Out The Footage Below