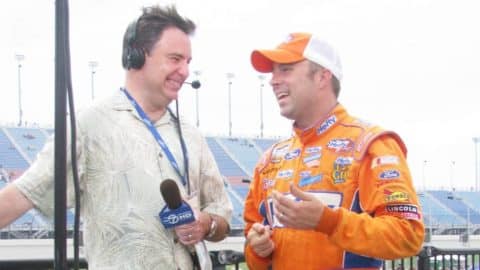 The NASCAR world is in mourning after one of its prominent drivers passed away suddenly on Sunday (May 2) at the young age of 42.

Eric McClure made three career starts in the NASCAR Cup Series and raced 288 times in 14 years in the NASCAR Xfinity Cup Series. Prior to his final race in 2016, McClure and Hal Martin formed Martin-McClure Racing in 2015.

On Sunday morning (May 2), emergency services were called to McClure’s house in Virginia, where they found his body. The Washington County, Virginia Sheriff’s Department confirmed his death to CNN. A cause of death has not been reported yet, but the publications reports that his “body was sent to Virginia Department of Forensic Science in Roanoke for an autopsy.”

His family released the following stated to the Associated Press:

“The family of Eric Wayne McClure, former NASCAR driver, announces with great sorrow his passing on Sunday. They would like to thank everyone for their prayers and support during this very difficult time.”

His death comes as a shock to most, considering he was active on social media on Saturday (May 1),  tweeting about sending his fiancé, Keira Brinegar, a SnapChat, which he called “chatfacesnap.”

Trying to send @keiralynn87 something on chatfacesnap thing. I think I#sent 5 messages as replies but didn’t disappear so idk if worked She’s doing a makeup session for client & I’m trying to wish good luck.@kelsey_schauf tried get me to do this in 2015 but I’d not even used IG

McClure and Brinegar announced their engagement on social media in September 2020 and have been together since at least October 2019, when the former driver called her the “light that comes in the darkness.”

It’s been a tough couple of years, but there is always light that comes in the darkness. This is what my happy looks like now..❤️@keiralynn87 #Godisgoosd#Isaiah43:19#newbeginnings pic.twitter.com/GhR87z2RGi

McClue is survived by his seven daughters, Mabreigh, Maryleigh, Mirabella, Merritt, Myanna, Meraline, Melania, who he shares with his ex-wife Miranda. Our thoughts and prayers are with his daughters, his fiancé, his family, and friends during this time.

Upon learning of his death, the racing world took to social media with the following tributes and statements.

We are saddened to learn of the passing of former driver and owner Eric McClure. NASCAR extends its deepest condolences to Eric’s family and friends. pic.twitter.com/378S81SPx2

Really saddened to hear about the loss of @ericmcclure today. Helped me get a start in NASCAR. Will always cherish our success & these memories. RIP friend pic.twitter.com/h9hZn1Ea2X

I don't even know what to say about Eric McClure's death. He was a friend and I learned so much from him about the grind it takes to chase racing dreams and also chase seven daughters. The world is worse off without him. Hug your loved ones. Tomorrow isn't guaranteed. #NASCAR

I slept in today, and woke up to the terrible news about Eric McClure. He was a friend. Very genuine. Big heart. I was very much looking forward to seeing him soon after the pandemic eased up. Very sad.

Former @NASCAR driver and team owner Eric McClure has passed away, aged 42, according to a statement from the sanctioning body. pic.twitter.com/KOFuLcUg62

Really saddened and shocked to hear about Eric McClure. Praying for his family in this time. RIP Eric

We are saddened to hear of the passing of Eric McClure. Our thoughts are with his family at this time. pic.twitter.com/NlqMDXs5i0

We are saddened by the news regarding Eric McClure’s passing. We extend our deepest condolences to his fiancé, family, friends, and those who knew him within the NASCAR community. Rest in paradise Eric. pic.twitter.com/nT1xPQsmu9