Former US Secretary Of Defense Donald Rumsfeld Dies At 88 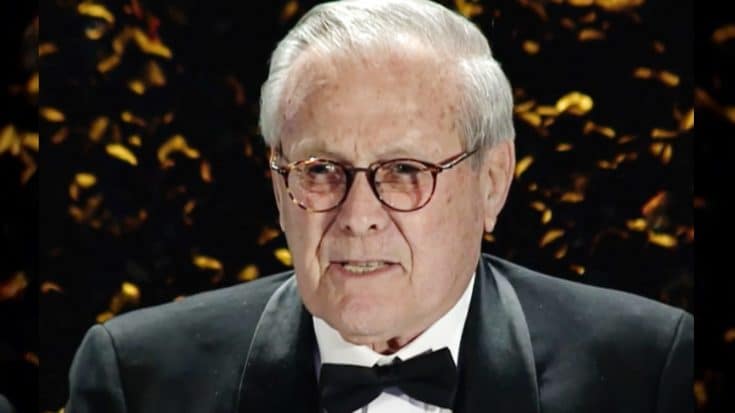 Former US secretary of defense, Donald Rumsfeld, has died at the age of 88.

Rumsfeld’s family confirmed the news in a statement obtained by CNN. In their announcement, the family revealed that Rumsfeld passed “surrounded by family,” but they did not disclose the cause of death.

“It is with deep sadness that we share the news of the passing of Donald Rumsfeld, an American statesman and devoted husband, father, grandfather and great grandfather. At 88, he was surrounded by family in his beloved Taos, New Mexico,” Rumsfeld’s family declared in their public statement. “History may remember him for his extraordinary accomplishments over six decades of public service, but for those who knew him best and whose lives were forever changed as a result, we will remember his unwavering love for his wife Joyce, his family and friends, and the integrity he brought to a life dedicated to country.”

Rumsfeld served as the secretary of defense under two presidents. First, Rumsfeld became the youngest person to hold the position under former President Gerald Ford in the 1970s. Rumsfeld later became the second oldest person to serve as secretary of defense under then-President George W. Bush in the 2000s. During his time in the role, Rumsfeld oversaw the Iraq War and Operation Enduring Freedom in Afghanistan.

Outside his role in the government, Rumsfeld was a family man, and he also vocalized a deep love for country music. In an interview with Sounds Like Nashville’s former company face, CountryMusicIsLove, Rumsfeld stated:

“I can remember taking a whole bunch of records with me when I went over to be ambassador to NATO back in 1973 so my children, who were little kids then, would have a chance to hear those records and learn about Loretta Lynn and Tammy Wynette and all those folks.”

For more on the story, check out the following video.