By Manly Bryant on March 19, 2021
Advertisement 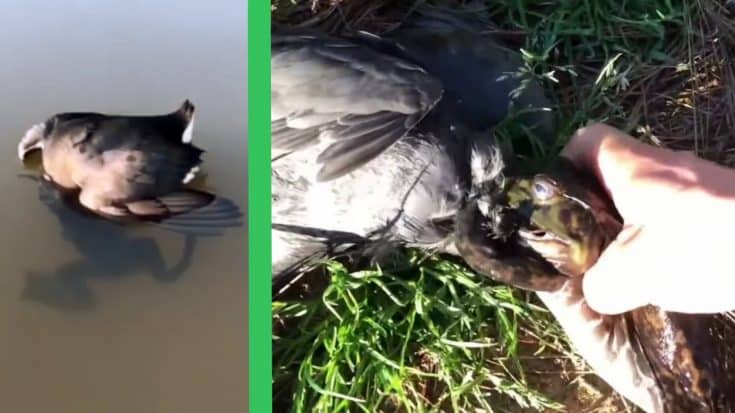 A man in Livingston, Louisiana stumbled upon one of the most amazing battles ever captured on camera of a bullfrog fighting a coot.

Commonly mistaken for a duck, the coot was filmed face down in the water and was being held under there by a massive bullfrog gripping ahold of the bird’s head. The man and his children were fascinated by this one-in-a-million discovery and started recording it.

“If this interaction wasn’t recorded, the majority of people you might tell a story like this [to] would call bullshit,” Nature Is Metal shared on Instagram.

The frog, which was roughly three times smaller than the coot, had the bird’s entire head inside of its mouth. One can only speculate how the two ended up in this predicament but it appeared the frog was either trying to drown the bird or the bird was stuck in the frog’s mouth and it was about to end badly for the both of them.

This is what the man did next

Experts strongly recommend leaving wildlife alone in situations like this to let nature play out naturally but, the man’s kids were watching causing a moral dilemma. Plus, he was thinking it could potentially end with both animals dying, so he decided to step in and break up the fight.

He splashed water onto them at first trying to get them to break it up but the frog was holding tight. At this point, the man decided to just reach down there in the water, pick them both up, and bring them back to land to assess the situation further.

He laid them on the ground and carefully squeezed the frog’s throat in order to get it to release the coot. It worked. The frog finally began to spit the bird up which appeared to be pretty deep down in the frog’s throat.

Once the coot was free, it quickly shook the frog spit off and made a b-line for the water. As it swam away and looked back to make sense of what just happened, the man held the frog up to the camera to get a good look and show just how magnificent the creature was.

You have to give it to the frog though. It looked like it was winning the fight. Either way, it was an amazing video that you should definitely take a look at.

Watch the Frog vs Coot Video Below