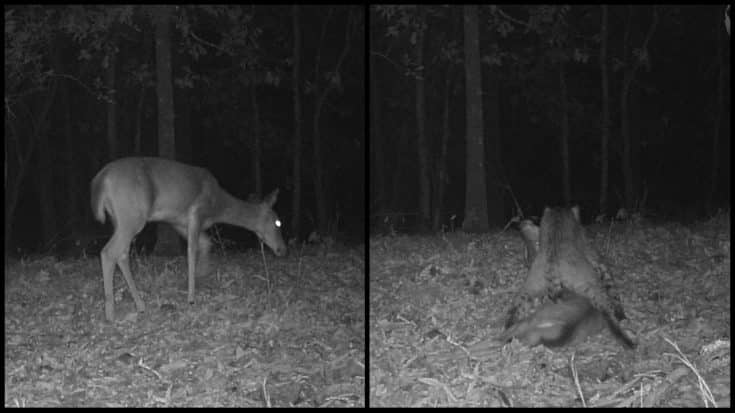 Be warned…some viewers may find these images disturbing.

A hunter in Pulaski County, Arkansas, got a big surprise when he viewed clips captured by his game camera. The hunter, Michael Villone, found that his camera had captured a rare scene as a bobcat attacked an unsuspecting doe.

“I can’t believe I got this whole thing on my game cam,” Villone said. “That was a pretty big boy.”

Pictures show the deer grazing in front of the camera. The next frame shows a blur on the ground as the bobcat attacks. Pictures that followed show the attack then the cat can be seen dragging its prey out of view.

“This is nature, this is just the way it works,” said Assistant Chief of Communications for the Arkansas Game and Fish Commission, Randy Zellers.

For those concerned about bobcats being aggressive toward humans, Zellers says there’s no need to be concerned. “Bobcats they really don’t like people. They stick to the dark and they stay away from people,” he said.

Check out the images below.